tennmogger said:
Commercial OTR trucks are always level. Our Mil trucks were made to be tilted during offroading (some as high as 45 degree), and maybe even parked at large angle of tilt. In those cases the lower tank can overflow, and the upper tank starve for fuel. For those reasons the crossover might not be a good idea.
Click to expand...

See previous post I made. Two vehicles I can think of, mainly two I've driven in the Army that have cross a cross over line on the bottom of the tanks. Oh, and the kicker is the tanks aren't the same size.

Anyone seen the 300gal fuel tanks that fit in the front of the bed of the 923 in front of where the bed sides fold and just up to the bed rails? I saw a couple of pictures of one, and like the idea.

I have a 900 series fuel tank for sale. Came off a M923 so it is the larger one. PM for more info. If you want pics send me an email addy.
C

I like the tank discussion, as I have been thinking about it. I am currently not cool enough to be an owner of a MV yet, but I do have an 89' Ford F700 as a toy hauler. On that truck I have 3 30 gal tanks, all tied together with the "low hanging crossover hoses". With a full 90 gallons of diesel I have personally run into the issue of parking on a slight slant and find fuel dripping out the breather on the low side tank cap. To keep this from happening, I just have a spigot style valve at each tank that I close when off road or have parked on uneven ground (to stop the equalizing), but I can open them all up and run 500 miles without refueling on the highway. To protect the fuel line that runs from one side of the truck to the other I just ran it through a piece of tubing welded to brackets on each side. It not only supports it, but keeps it at a level above the ground that I know won't be in danger of snaging. This is not a 4x4 truck so I don't get crazy with it.. but that doesn't stop me from finding some gnarly camp sites.


Now.. for a new idea. Do any of you guys know how fast the fuel returns to the tank? or how much volume is being dumped back? The reason I ask is that since I turn wrenches for a living (on German kraut wagons and the like) I am noticing more and more fuel tanks balanced over the drive shaft in AWD and RWD cars. Better weight distribution and blah blah blah.. but the pickup is only on one side of the tank. So you end up with 5-7 gal of gas that is lost on the wrong side of the fence. To fix this they run a suction jet pump on the far side of the tank. So...... fuel returns from the rail (or HP pump in our case) and goes into the tank at the pump, then runs into the far side of the tank where there is a one way check valve on an angle to the return line (low pressure zone caused by the moving return fuel draws the fuel from that side of the tank over with the return fuel), then that exits the return line at the fuel pickup side. This system passively pulls the fuel, as long as it is there, to the feed side, till it runs dry. Then it just slightly aerates the fuel from that point on, but it is so minimal it is negligible. The one way valve keeps it from transferring back when the car is shut off. To keep this system working the same, you would still need an open transfer line between tanks but it could be at the 3/4 mark instead of the bottom. That way the primary tank doesn't overfill when all tanks are full. If I am rambling, or you are lost, I apologize.. I can try to draw a picture. haha It sounds like a lot of work. And it sounds complicated. But it is not, I promise. I think it is a system that, once set up, you can forget about it for a long time. One pickup, one gauge, one tank that fills both at the same time when at the pump but will feed back to the primary tank without switches or low hoses.

ok. I am done now. Thanks for reading my book.

I worked on a few semi's and what your looking for is a top draw system.The draw from both tanks, to a "T" in the middle. They also have a "T" on the return line.
Heres a site that should help to figure out some of the steps.

that paper sounds much easier than I was thinking, but it also appears to have some issues and may be a touchy setup. I would almost rather over complicate it (like the military does so well), so it will fix its own problems, than worry about it working right.

You guys are reinventing the wheel, just use the setup that is used on the tractors and wreckers, it is simple and easy to add and use.
S

My 2 cents, be careful what your asking for. I have a an A1 wrecker, 2 A1 and one A2 tractors. with dual tanks ,unless your drving the heck out of these trucks and/or keeps the tanks full to prevent moisture condensation, dual tanks are just a liabilty on a hobby MV. Commercial trucks dual tank systems typically have a cross over supply line and both tanks draw down for fuel suppy, no switch isolation.

chrsbb19 said:
I worked on a few semi's and what your looking for is a top draw system.The draw from both tanks, to a "T" in the middle. They also have a "T" on the return line.
Heres a site that should help to figure out some of the steps.

It should be simple. Even length tubing on both lines, no kinks and no loops. I still have the brass selector on my 816, thinking about switching it over but keeping the selector for a reserve tank.

If any of you want the stock tanks and valve and switch I have several just call.

I like the idea of jsut "Teeing" the feed and return lines of the two tanks together. Simplification is always the best route.
F

I installed a second fuel tank where the tool box was. You need the mounting brackets and the tank. The tool box bracket are different and in a different position to support the tank. I used an electric 24 volt external fuel pump with a filter head in front of it for a spin on fuel filter and push lock hose to feed from the fuel line on the spare tank to the return on the primary tank. I put one way check valves on the return line and the axillary feed line and use a switch in the cab to transfer fuel to the primary and the M931 fuel gauge set up and switch to monitor the fuel levels in the tanks. Worked quite well and all the hoses and gear are up in the frame protected. Much simpler than trying to do a complete M931 fuel set up.
Last edited: May 19, 2016 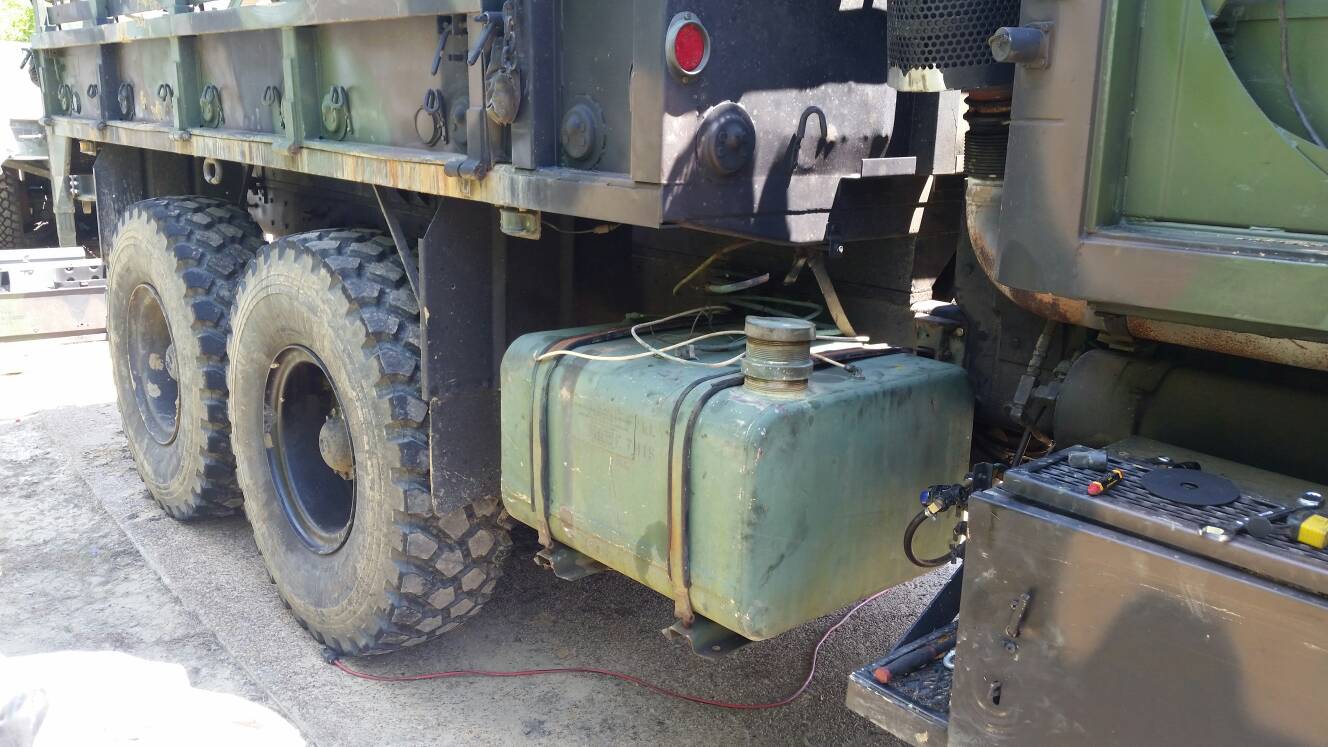