swbradley1 said:
That's funny Warthog, I'm turning 60 as well and no one did an article on me.

Do you all know about the special landing gear?

Do you mean the crab walk gear? Strange to see them come in to Pease Air Force Base NH plane crabbing into the wind and all the gear lineup at an angle to the runway.

Do you mean the crab walk gear? Strange to see them come in to Pease Air Force Base NH plane crabbing into the wind and all the gear lineup at an angle to the runway.

That's quite the anti aircraft weapon in the video if you can get the plane to sit still.

PS sorry for the double post it duplicated instead of editing.
Last edited: Jun 26, 2019

Any of you in the DC area during the mid 1950s when they flew a huge flight of B52s over Washington DC. I can rembered it as a kid they flew low and slow over the City. The point of it was to let the Russian Embassy see, count, and photograph them so that they would have no doubt about how many we had "a lot". My memory of it as a kid was that you could see the numbers on each plane and it seemed to go on for a long time.
Click to expand...

I saw something like that here (in D.C.), about 4-5 years ago, and never saw any explanation anywhere.

It was nothing as dramatic as squadron after squadron of B-52's, but it was Bell OH-58 "Kiowa" helicopters:

Wonder what that was about?

You just GOT to find a pic of that day CMPPhil, that must have been awesome.

I’m a 100% disabled wreck. I’ve built a Gun Truck, maintain 2 M35’s, an M1009, M37, and others. I’m currently refurbing a G506. The thing is, it all starts with one bolt and one wrench. 7+ years on the War Wagon and I’m still tweaking it. It takes me between 2 and 3 days to change a tire. I’m a helicopterman to the core, I get cut, I bleed hydraulic fluid, I eat grease foods, it adds a little extra taste to the chow hall food. When I dream there’s always rotors turning and engines burning...
okay, that’s a bit over the top, but I really like helicopters.

Another Ahab said:
Watch what you wish for, jeffhuey1n, it might come true!

That would be some WORK wouldn't it? 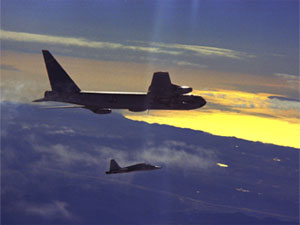 With a penchant for chasing tomorrow, NASA's B-52B "008" always carried the future of flight under its wing.

First taking to the air in June of 1955, the venerable aircraft began its illustrious, nearly 50-year U.S. Air Force and NASA career as a bomb navigation system test airplane for the Air Force's B-52 fleet. Ironically, the bomb/nav system test bomber spent its career dropping flight research vehicles rather than bombs.

In 1959 it became one of two mothership launch aircraft for the X-15 program, which paved the way for America's early manned spaceflight efforts. Double-0-eight cut its teeth launching a majority of the 199 X-15 flights.

The B-52B's first and last missions launched hypersonic research vehicles, the first being launch of the number one X-15 in 1960. Beginning with the X-15 program, which matured reaction control systems and thermal protection systems for spacecraft, and ending with the X-43A project, NASA 008 served hypersonics research well.

"I was here in Jan. 1960 for the aircraft's first X-15 flight and in Nov. 2004 for the last X-43A flight, and for all of the flights in-between," said Roy Bryant, NASA Dryden's B-52B project manager of nearly 30 years. "Pride, dedication and innovation have been the key elements of the people who maintained this vintage aircraft to support the many projects that have kept the United States at the forefront of aerospace development for the past 45 years," Bryant said.

Since the end of the X-15 program in 1969, NASA 008 has supported virtually all of NASA's aeronautical research programs requiring air launch, and some research missions that didn't.

Starting in the mid-1960s, NASA 008 carried aloft several types of lifting body aircraft over a 10-year period. These wingless wonders demonstrated controlled flight without wings and precision landing without power that proved the viability of gliding Space Shuttle landings. With the arrival of the Shuttle era, NASA 008 dropped Shuttle solid rocket booster test vehicles in order to test the booster recovery parachute system. During the early 1990s, the aircraft kicked up plumes of dust on Rogers Dry Lake wringing out the Shuttle's new drag chute system.

One of the more memorable missions for Bryant was a day in 1978 that one of the Shuttle solid rocket booster test vehicles didn't drop on command. B-52 launch panel operator Ray Young reported that his lights indicated the hooks holding the vehicle had opened, even though the vehicle remained attached to the pylon. Pilot Fitz Fulton tried maneuvering the aircraft to free the stuck vehicle, but to no avail. "There was a lot of concern that we'd damage the B-52 if it came loose on landing," Bryant remembers. Fulton greased the B-52 in for a really smooth landing, and the test vehicle held on.

Over the years the aircraft launched various experimental fixtures, such as the FB-111 crew capsule, and advanced remotely-piloted vehicles like the F-15 Spin Research Vehicle, both for the Air Force.

Maintenance crews over the years grew fond of the aircraft, treating it more like a classic car than an old bomber. Double-0-eight's crews kept it in ship-shape, seldom failing to have the aircraft ready for a mission. Not that the old bird didn't balk at the prospect occasionally.

A hieroglyphic-like silhouette representing the last research mission, recently painted on by crew member Monty Hodges, joined many on the aircraft's starboard fuselage, a virtual museum wall documenting every mission of the aircraft's flight through history.

As NASA 008 flies into the sunset, its legacy continues to soar into the future. Thanks for the ride, 008.

Additional B-52 photos are at http://is2.dfrc.nasa.gov/Gallery/Photo/B-52/index.html

CMPPhil said:
Any of you in the DC area during the mid 1950s when they flew a huge flight of B52s over Washington DC. My memory of it as a kid was that you could see the numbers on each plane and it seemed to go on for a long time.
Click to expand...

Another Ahab said:
You just GOT to find a pic of that day CMPPhil, that must have been awesome.
Click to expand...

Just thought of something. Wonder if THAT was the reason my old man built the bomb shelter off the side of our house (I was just born at the time):

- Might have struck him that those squadrons could just as well have been all USSR Backfire Bombers...

"Hmmm, maybe I should look into that shelter thing".

Nobody to ask now, everybody dead. But I wonder?

Thank you for an excellent article.

The link quoted below seems to be BROKEN.

Guyfang said:
Additional B-52 photos are at http://is2.dfrc.nasa.gov/Gallery/Photo/B-52/index.html
Click to expand...

I couldn't get it either, thought my service was slow at first

Sorry. I have not been paying attention. Been picking cherries for the last week, 7-8 hours a day, for my schnapps production.
If you google NASA retires B52, you should find the whole article I printed, and the linked pictures should be there. I saw this bird as a kid. North American Rockwell had some projects that my Father worked on, that allowed him to take us kids to watch. So I saw 008 and also one of the X15 landings, as well as the maiden flight of the XB70. Heady stuff for a 10 year boy.

Here in OKC, Tinker AFB is a Maintenance Depot for the B-52.
You see them often.
Awesome aircraft.

Saw one a few days ago at about 2000 AGL setting up for landing at Tinker.
They are big.

Those things landed on skids if I remember right.

Very cool that you are a witness, Guyfang!

The B52 was the first aircraft I worked maintenance on as a young LT. Still my favorite, even though I've moved on to fighters, the old BUFF will always be my first love.

Berto said:
The B52 was the first aircraft I worked maintenance on as a young LT. Still my favorite, even though I've moved on to fighters, the old BUFF will always be my first love.
Click to expand...

What's the story behind the nickname?

dmetalmiki said:
Thanks...You just reminded me that,......I am **years past my sell by date!
Click to expand...

Keep on the sunny side, dmetalmiki, as long as you don't turn sour you are ALL good!

It is an acronym, civilized airmen, say it stands for Big Ugly Fat Fellow...the uncivilized replace Fellow with a four letter F word...I'm new here so I will act civilized.

Civilized behavior is commendable, and appreciated.

The world does not need any more ugly, we got enough.

I am working hard to eliminate all foul language and swearing from my vocabulary, but it's a %@*&^%!! difficult habit to break, I'm telling you!

As a foul mouthed Marine, I am constantly catching myself dropping every known filthy word in the English language. It’s helped me out a couple times and got a bit of trouble in others. I worked on a crashed Canadian Helicopter in front of a very large airshow audience. There were moments of frustration and the occasional hammer on thumbnail moments which were handled with copious amounts of bad language. I found out after I returned to my hotel room that I’d been on TV the whole time. Never trusted news people after that.


Another Ahab said:
Civilized behavior is commendable, and appreciated.

The world does not need any more ugly, we got enough.

I am working hard to eliminate all foul language and swearing from my vocabulary, but it's a %@*&^%!! difficult habit to break, I'm telling you!
Click to expand...