USAFSS-ColdWarrior said:
Back on topic here....


What is the current timeline for legislative action on this Bill?

Are there dates for public hearings and any heads-up for attendance by interested parties???

Subscribed to be kept in the loop.

Hey everyone, just checking in again to see if anyone has any "new" news for Colorado? The upcoming session for the legislature should be getting ready to start up right after the new year and I'm planning on writing and also calling all of my local politico's plus the original sponsors of the new law that currently has us hamstrung. Does anyone have a well worded insightful letter they have sent they want to share for bullet points? I have to take deep breaths so I don't use a lot of finger pointing and use "you people" too much.

Hope everyone has a very Merry Christmas and a great New Year.........Semper Fi and God Bless America!

Here is the latest in Colorado. We are still lookimg for help to represent colorafo. If anyone in Here would be willing to help talk to the capital please let me know. 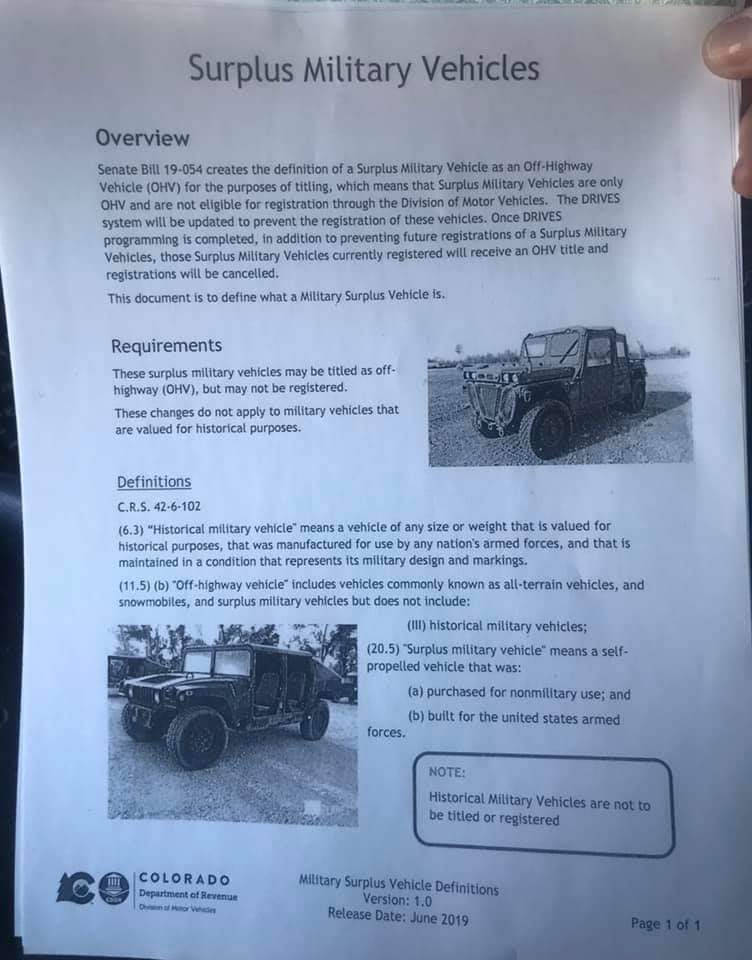 Taborljoshua said:
Here is the latest in Colorado. We are still lookimg for help to represent colorafo. If anyone in Here would be willing to help talk to the capital please let me know.

So the historical guys are sitting rosy, the rest of the owners are screwed... just like I predicted...

Nope not true. I have a recording of the DMV stating no Former or Historical MVs will be road legal. Its on the bottom right note.

Sent from my LG-H918 using Tapatalk

Might be helpful to post the audio here rather than facebook/join the group/wait for the mod's approval/etc. Just a suggestion. Maybe transcribe the VM and post?

Toward the end the woman said that the federal government has deemed that they are not road worthy vehicles. So if it's on the federal level, then other states would be doing the same. Are other states having these same issues too?

So where is the actual bill? I have searched but can't find the actual approved law. It seems that HMV's were excluded but the DMV overturned this (which they can't). So who has a copy of it?
R

I read the first couple of pages, but could keep awake. My guess is that since de-mil'd vehicles were exempt from emissions and mechanical inspections, the state couldn't make any money off them and therefore didn't want them on the roads or highways.


So I'm assuming this will also be effecting Pinzgauers too?

Good morning everyone......here's my two or three cents worth again. Last year the Colorado legislature passed a new law that would allow "surplus military vehicles" to titled as off road use only as a result of something they did previously that screwed up a guy in the SE corned of the state that buys / sells "surplus military vehicles" and adds equipment to them, sells for agriculture and other uses. previously they had screwed this guy over some how and this was supposed to be the fix.

In the new law it specifically says that it does not effect "historical military vehicles" which can be titled for road use, license by the state and driven on public roadways. When the mew law went into effect, the Dept. of Revenue decided on their own accord to no longer title or license "historical military vehicles". No explanation given, just that they were going to resend current titles issued and deny registration to previously licensed and legal road used vehicles.

The local Pres. of Military Vehicle Collectors of Colorado had tried to meet with the bureaucrats at ran into a stone wall....apparently they don't care that they are making up their own rules as they go. (We had a shift of power last election from Purple to Deep Blue). A couple of members plus the Pres. met recently with the legislature again on a bill dealing with transportation and brought up this issue...supposedly they were unaware of it affecting "historical military vehicles".

Hopefully at some point there will be another hearing where "we" might get listened to.

Since I'm in the Denver metro area, I might be able to help (not sure how). Please post updates on the hearing. Yes, Colorado is definitely deep blue, but that's mostly due to the large influx and populous now in Denver and along I-25. I think the rest of the state is still fairly red.
R

Taborljoshua said:
I hope everyone cam access the video.

I'm not seeing a video, the URL points to the page I had posted earlier today.

My apologies the video I posted last night. I was just posting the link for the bill.

Taborljoshua said:
My apologies the video I posted last night. I was just posting the link for the bill.

Yes, I heard the voice mail, thanks. I'm confused, was voicemail from TX or CO DMV?

Voice mail was for the Colorado DMV

Sent from my LG-H918 using Tapatalk

ramack said:
Toward the end the woman said that the federal government has deemed that they are not road worthy vehicles. So if it's on the federal level, then other states would be doing the same. Are other states having these same issues too?
Click to expand...

"The woman" is 100% wrong or lying. The Federal Government has deemed no such thing, not even for HMMWVs. MIL-STD-1108B is the military counterpart to the FMVSS (Federal Motor Vehicle Safety Standards).

Yes, some states are having difficulties but not because military vehicles are not "road worthy."

To find out more, check out AMVO on Facebook:

To get involved, contact the administrator of that page, Dave Demorrow. You can also reach him here at @TMOMW.
Dave has been working on this issue but he's a Texas resident. He can help you but he needs Colorado residents to work with him.
You must log in or register to reply here.
Share:
Facebook Twitter Reddit Pinterest Tumblr WhatsApp Email Link