So in would like to add a turret to my steel roof. It came from a GMV truck.

Is there a guide to the different Hmmwv turrets? I see references to old, vs new. Light vs heavy...are parts interchangeable?

What would be the best place to get a list of the parts I need? I see various kits for sale, but I don't know how complete they are...

Start with TM9-2320-387-24P. It’s by no means comprehensive of the myriad of configurations fielded.

I have almost all types...But, you need a turret support .
Look in TM that NDT listed fig 196d # 24 shows the turret support you need first.
I don't have one but have everything else....but can't get to it until next week.

I might add that that TM is super confusing as organized. I printed the turret applicable pages and rearranged the pages such that all the same UOCs were grouped together. Then it made more sense. You then have to pick a path to go down, as the turret components don’t necessarily interchange between vehicle types.

Most important question to ask:
1) Powered Turret or Non-Powered?
Non-powered is cheaper and easier to assemble, more plentiful part.
Powered have at least two systems plus the MRAP stuff, some stuff is interchangeable, most isn't without drilling new holes then using stainless threaded inserts.

4) Several different turret bearings
Early A0, A1, into A2, "silver" colored aluminum lightweight bearing
A2 production brought an improved black anodized aluminum turret bearing
M11XX, OGPK, etc mandated a heavier bearing, the approx. 3in thick "heavy bearing" painted black, has some through holes, have some threaded insert holes for bolting direct to, and, the inner wall has at least 2 different hole arrangements for M1114 and M1151, for bolting on the different electric motor brackets, the different traverse locks, the different electric motor, chain driven traversing sprocket brackets
Then there is a gold colored heavy bearing.

6) Weapons Mount, aka Chickens Foot, a pintle adapter drops into the hole in the Weapons Mount, locked in with threaded bolt or quick release pin, a UPA Universal Pintle Adapter drops into that, then your Mk64, Mk93, M23 with large M3 pintle drops into the UPA.
A0, A1 into A2, used a stamped 3 toed weapons mount
A2 round weapons station used the "Swiss Cheese" welded construction with lightening holes
M11XX milled plate weapons station use milled/water jet cut thick flat aluminum plate weapons mount

BPMTU, the brains of the electrohydraulic drive system, Battery Powered Motorized Traversing Unit, has a red emergency stop button, connects to power, the joystick and motor assy. At least two different BPMTU models, may or may not be compatible.

9) Joystick box allows the gunner to traverse the turret left or right, has magnetic base to stick to whatever steel part is most convenient for gunner, like the TOW outlet cover.

Then you have bolt on pads, traverse lock assemblies, brackets for hanging the gunner strap, sling or seat.

This is a simplified abbreviated description of the major components, some of the above I may have crossed a part with a different model truck, the M1114, M1151, M1165 stuff starts to get real complicated.

You can adapt the later heavy bearing, geared tooth ring, and power drive systems to the earlier A0 to A2 turret kits with some drilling, alteration, and use of helicoil inserts here and there. But it is easier if you start with components from one system or the other instead of how I started out with two half kits from two different systems that didn't combine to form one drop in powered kit.

Backbone of the Turret System, the Weapons Support, exampled of the 5point A0-A2, HMMWV LWS, and 6 point M11XX Weapons Stations.

Oh, man I love this forum. You guys are amazing!

@Crapgame, thank you for sharing your insight on the subject. Your post pretty much answers 90% of my questions!
Last edited: Nov 14, 2019

Great right up....definitely needs to be a sticky 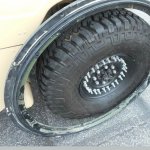 So is this an A2 3 piece hatch and a black or silver ring?

Retiredwarhorses said:
Great right up....definitely needs to be a sticky

Gold ye have struck! Lionel was looking for some turrets.

So is this an A2 3 piece hatch and a black or silver ring?
Click to expand...

Improved 2nd Generation black Aluminum Bearing, the round A2-M1114 stamped sheet metal Weapons Station, and two piece hatch, that extra piece out to the side is just a support for the hatch when it is opened, folded and locked down for action. That side support takes the place of the cat-ears stamped as part of the A0 Weapons Station tray

Retiredwarhorses said:
Great right up....definitely needs to be a sticky

Mk23 said:
So in would like to add a turret to my steel roof. It came from a GMV truck.

Is there a guide to the different Hmmwv turrets? I see references to old, vs new. Light vs heavy...are parts interchangeable?

What would be the best place to get a list of the parts I need? I see various kits for sale, but I don't know how complete they are...
Click to expand...

Your profile needs to include your city and state.

If you are in Washington DC, feel free to drive to NYC and see my fully operational early turret.

If you're in Washington State, it might be a long drive.