On Sunday 6/1, I took my M1009 to a shop to get the front end aligned. The technicians used every tool in their arsenal to break the passenger side tie rod adjuster loose – a 2 foot long crescent wrench with a 4 foot breaker bar, a torch, and a 16 lb sledge hammer. Their efforts achieved absolutely no movement in the tie rod bolts. They told me the threads are shot, and there was no way for them to align the front end. The manager told me to replace the tie rod assembly including the tie rod tube. (A side note: you know the situation is dire when you witness all 5 guys in the shop stop what they’re doing to come over and help. Three of them leaned on a breaker bar while one held the torch to the tie rod tube and the other made sure the truck wasn't going to burst into a ball of flames! Not good…)

This led me to seek out the parts and part numbers. I needed the driver’s side tie rod end, the tie rod tube, and the passenger tie rod end. I called O’Reillys, Car Quest, and Advance. I spoke with the guy that works the Commercial orders at Advance (George) – he almost always knows how to find all the oddball parts I need for my military vehicles. I was able to get the part numbers for the tie rod ends. When it came to the tie rod tube, I had him and everyone else stumped. I asked George to look up the tube under every conceivable name that it could be listed under. Alas, he was unable to find the parts. I searched the CUCV Forum multiple times using the built-in search function as well as doing site:steelsoldiers.com searches on Google. I was unable to locate the tie rod tube part number. I did find multiple threads regarding M1008 tie rod part numbers. This was not very useful to me, though.

I looked up the part numbers in the -20P manual. On Page 229 Figure 102, I saw that I need numbers 3-9. The tie rod tube is listed as #7, and the GM part number is 14026804. The description is TIE ROD, STEERING. I took this part number and called George. He tried cross referencing it, and was unable to find anything. I also called the other parts houses I spoke to earlier. They were unable to find that part. Then, I tried multiple Google searches to cross reference it myself. I even found a couple of web sites that allow you to cross reference the part. I learned that the part had been discontinued.

Finding absolutely nothing and not knowing where to turn next, I came up with a brilliant idea: call Federal Mogul (makers of Moog parts). I found a phone number on the corporate web site, pleaded my case, and was transferred to a technician in the Chassis Department. I explained my situation. He told me that Federal Mogul no longer produces the tie rod tube for the axles on my K5. He explained that they do still produce the tie rod tube (steering center link tie rod end) for the Dana 60 axles. In order to use that steering center link, I have to replace the entire assembly at the same time. Thankfully, that is EXACTLY what I want to do! He said that the assembly fits perfectly on the corporate 10 bolt(M1009) axle I have.

Note that the driver side tie rod end is built into the bar. The passenger tie rod is attached to the bar using the sleeve.

I also will replace the steering stabilizer. I had two options here – Monroe or Rancho. I paid the extra $25 and bought the Rancho. I like the way it’s designed.

I ordered the parts yesterday, and will receive them tomorrow (I LOVE Amazon Prime )
Saturday morning, I will replace the components. I’ll update this thread with my progress. There’s an 80% chance of afternoon rain tomorrow. Hopefully, I won’t get washed out.

Note to Moderators: Please feel free to add this information to the CUCV Wiki, the CUCV Sticky, or the CUCV helpful threads. I really want to save others the aggravation I've experienced in the past couple of days. 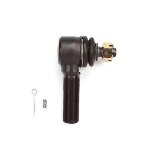 This is what i've always used to adjust tie rods-not a crescent wrench. (might have been part of the problem)
http://store.snapon.com/Tie-Rod-Adj...for-large-cars-and-light-trucks--P635989.aspx

I replaced all of the parts yesterday. It took a lot less time and effort than I originally anticipated. I didn't need any ball joint removal tools - just a hammer and a few sockets.

I just ran into the same situation with my M1009. LMC list an adjusting tube on their catalog, but they say it's only for the suburban. Without being 100% sure I didn't want to order it. This setup cost almost the same about at NAPA that the tube listed for on LMC. Thanks for posting, I honestly hadn't thought about this idea.

Glad I can help, sir. I never bothered to look at the LMC catalog. I prefer using other sources for replacement parts that don't involve paying through the nose for shipping.

Hey OD Fever do you have a Dana 60 in your blazer or a corporate 10 bolt? Your first post has some contradicting info on that.

Don't toss that old tie rod. With alittle grinding it makes one **** of a pry bar.

Or get it straightened and save it for a spare (or just reinstall it).

You're right, Rusty and Doghead.

Doghead: Could you please edit my initial post and change it to the correct axle type? I would like this thread to be as accurate as possible. Thank you.

Edited the one error I noticed, but do you want the 4:10 term changed to dana 60 also?

Yes. Please make all changes that you feel are necessary. Thank you.

I wanted to update this thread with a tid bit of info. The part number DS893 above will work in a blazer but it is NOT meant for the dana 60. It is a MOOG part meant for surbabns, K20s, blazers, etc.
It is too long to fit in the Dana 60s.
If you ended up in this thread looking for Dana 60 parts, you can use parts 2011R and 2012S mentioned above but you must buy the DS905 tie rod bar in lieu of the one mentioned above.
You must log in or register to reply here.
Share:
Facebook Twitter Reddit Pinterest Tumblr WhatsApp Email Link