I purchased a 1953 M38A1 awhile back. It had a Carter YF carburetor when I purchased it, the YF is standard on commercial jeep F head engines. My YF leaked a little, and ran a little rough. So I found a Carter YS 950 at one of the California meets, and had it rebuilt by a competent carb shop. So I take off the old Carter YF, clean everything up install a new gasket, and then go to install the new Carter YS 950, and the float bowl on the YS 950 bangs on the engine valve cover and will not sit flush on the intake manifold. I have to be missing something, and I couldn't find anything on this in the TMs so I'm raising the white flag. HELP!

Do you have that very thick fiber spacer that goes under the carb? It is like 5/16 thick.

NDT, no I do not, that is probably what's causing my problem. I'm not a jeep guy, but I'm quickly becoming familiar on all the ins and outs. I'll get on the phone and order one tomorrow. I understand Peter De Bella is a good source for jeep parts. Thank You!!
Last edited: Jun 23, 2020

Found out that even with the spacer the YS carb doesn't fit. It turns out the model of valve cover is wrong. Somewhere along the way, a previous owner swapped out the M38A1 engine, and replaced it with a commercial F134 F Head engine from a Willy's pickup, or station wagon. The commercial engine uses a Carter YF carburetor, and a valve cover without a relief area for the YS carb., a different oil fill tube and more. So I'm doing my best to make a list of parts to get the engine back to an M38A1 configuration. And I thought all Jeeps were the same.

Here are the differences between the Jeep M38A1 valve cover on the left, and the Commercial Jeep (pick up, station wagon) valve cover on the right. As you can see, there is a greater relief on the right side center section of the M38A1 valve cover to clear the float bowl of the YS950S carburetor. The commercial Jeeps, used a Carter YF carburetor that has the float bowl facing forward. Hence no need for the relief area on the valve cover. Took me a while to get this figured out, but I'm learning. The oil dipstick tubes are an adventure as well, but I'll save that story for later.

Tracer said:
The oil dipstick tubes are an adventure as well, but I'll save that story for later.
Click to expand...

Plenty to be found on Ebay!

DeetFreek said:
Plenty to be found on Ebay!
Click to expand...

DeetFreek, I found this one on Ebay several days ago. These dipstick tubes come with 0,1,or 2 vent tubes. I purchased one with 2 vent tubes as that is what most of the military M38A1 Jeeps seem to have. One vent tube has a hose to the fording device, and the other hose goes to the breather on the valve cover. The one that is present on my Jeep now has 0, no vent tubes. I just went with the dipstick tube that the TMs showed for a military M38A1. I assume that the other 2 types of dipstick tubes might be for commercial Jeeps.
Last edited: Jul 30, 2020

Good enough, two tubes is correct! When I got my A1, the hose from the dipstick tube to the crossover hose was just vented to the atmosphere. A homemade crossover had been made and no provision for recirculation was anywhere on it. I may as well just had one tube at that point! Pay no mind to the red circle lol. 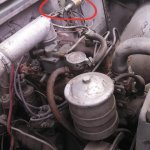 It has been corrected now, and tidied up immensely.

Looking good. My M38A1 didn't have an oil filter when I purchased it, so I took care of that right away, and mine needs a fan shroud as well.
Last edited: Aug 9, 2020

Now my YS950S Carburetor fits, along with the new dipstick, and dipstick tube!!! I'm in the garage to keep out of the roasting sun. So now I'm in the shade of the garage sweating bullets. Now it's off to dollar general, or family dollar to get a box fan to cool things off. I don't know, but I may have the Jeep running tomorrow. Then comes the joy of installing a new wiring harness, this one is smoked. I'm sure I'll have some more posts concerning the wiring harness. As I don't know if I'll run into any more oddball military vs civilian jeep problems. Many thanks to NDT and DeetFreek for their help with this. You guys are great!
Last edited: Aug 10, 2020

I spy with my little eye a fording valve on your crossover tube. Do you have evidence on the dash board of the fording control being mounted? It will be a 5/8 hole with 4 ea 1/8 holes surrounding it in a square.

NDT, this is the only thing on the dash that matches your description.

Tracer said:
View attachment 808658 NDT, this is the only thing on the dash that matches your description.
Click to expand...

Yes sir that is it, your A1 had a fording kit at one time.

NDT, would the fording kit designate what branch of service the Jeep was in ? Well, I have the fording valve, now I need to scrounge the rest of the kit. Thanks NDT!
Last edited: Aug 10, 2020

Tracer said:
NDT, would the fording kit designate what branch of service the Jeep was in ? Well, I have the fording valve, now I need to scrounge the rest of the kit. Thanks NDT!
Click to expand...

All USMC Jeeps had fording kits and maybe 20% (best guess) Army Jeeps had them.

Good to know. I'll try to restore this as a USMC Jeep. I just skimmed over fording kit parts on the internet. It looks like there are quite a few parts for fording kits available. I noticed there was only one individual selling data plates for the dash, so I picked one up. All I know about my Jeeps past is there is a coat of Red Paint under the green, so I guess at one time it belonged to a FD. NDT, Thanks Again!

NDT said:
All USMC Jeeps had fording kits and maybe 20% (best guess) Army Jeeps had them.
Click to expand...

Now there's a stat I wasn't aware of. I have the dash provision, and a couple of extra holes as well! Made a plate to cover it all up for now.

As for the wiring harness, I know the feeling of the mess that it can be. I've got quite the hybrid harness going, keeping as many of the original parts as possible (or integrating them back in) while staying with 12V since it's been converted. This was what I tore out shortly after I bought my A1 back in '14.

Looking forward to seeing your progress!

Mine is in similar condition. The previous owner rewired the starting circuit so it starts, but that was it.

Tracer said:
Mine is in similar condition. The previous owner rewired the starting circuit so it starts, but that was it.

At least they're not difficult to figure out.

The harness doesn't look to bad to install, and I have some new correct gauges to go in the dash. Today I got my new vacuum lines installed from the dipstick tube to the valve cover, and fording valve.
Last edited: Aug 11, 2020
You must log in or register to reply here.
Share:
Facebook Twitter Reddit Pinterest Tumblr WhatsApp Email Link