I'm going to ask a question that will likely sound uneducated but I can't find a thread that addresses this specifically. Please keep in mind I'm still learning! I'm curious about hooking up a house with a 60 amp connection, which will safely allow for the full capacity of the generator. It seems like most people are satisfied with 50 amp but that seems like you're cutting the generator short of its capabilities. I see people talk about the issue of amperage difference but specifically, I would like to be able to connect 60 amps with a straight blade plug and receptacle. Is this possible? I do see plugs rated at 60 amp however they also say 125/250 volt. Is this an issue? With my little education, I just expect to see single phase plug/receptacles written as 120/240 volt. This voltage difference makes me question if this is still appropriate for home power. I'm guessing it's not an issue as it's simply what the wiring and receptacle/plug are rated to carry. For cable I would be using 50' of 4/4 SOOW. I don't want to go over to pin and sleeve, not for a expense but rather I would like to keep the more common connection so a less powerful generator could still be hooked up later. I plan on setting up an interlock and to do whatever load management might be necessary (likely to be none since I have nat gas utility for heat and some appliances).

I also want to put a 220 receptacle on the generator as I will never be using it's 3 phase capabilities. Any suggestions on that end would be welcome. I see people use some type of RV unit for this sometimes. I am guessing that allows for a breaker to be present before the receptacle?

Here's an example of what I was looking at:

Right or wrong I put a 60 amp breaker on my interlock. Everything else was rated at 50 amps which I was hoping had some buffer built in. I didn't want the breaker tripping when my 3.5 ton AC kicked on. The AC side is actually on a 40 amp breaker in the house panel. There probably wasn't a big chance it would trip the generator breaker except it would have other loads running at the same time. I am connected with short runs of 6 gauge wire. About a foot and a half from generator to the 50 amp RV outlet, same at the house box, and a 10 ft piece between the two.
Z

I used a 70 amp breaker. The 803 is rated to 52 amps. Searching the wise old internet led me to a rule of thumb to size the breaker for 125% of maximum amperage. 125% of 52 amps = 65 amps. I suspect the day I bought the breaker Lowes or Home Depot were out of 65s and I went with a 70amp. Again, I was basing it all on MAX current from the generator and I have never needed that.....even with neighbors plugged into my spider box to run their refrigerators and such.

My connectors are 4 conductor twist on type rated at 50amps. I bought an Ebay special spider box for neighbor connections and it works well with the twist type RV 50 amp connectors.

Some info on Breaker Sizing: https://www.ecmweb.com/basics/article/20898940/sizing-a-circuit-breaker

I must admit it kinda hurt drilling the holes in the generator.

Used a step-bit to make the big hole for the wires.
I kept the SJOOW outer layer on to help with rub outs caused by vibration.

Installing some 120V outlets. Each Receptacle is on its own 20A breaker. (The power panel comes with one but I cut the hole out to install a 14-50R instead)
I was originally going to install 2 boxes (4 total receptacles) and have 1 breaker for each box, but then I realized I could just use cheap power strips to split the output if I needed a bunch of lower draw devices.

Finished, Yes I do plan on painting it eventually.

Video of it in action.

Ha! I don't want to drill into mine either! Good job though.
I am finding now that the limitation for 60 amp is in the inlet plug. It seems impossible to find a straight blade inlet that's rated at 60 amps. Only pin and sleeve.

The way you worded your first post makes it sound like if you exceed 50A on that plug for even a moment it will stop working.

Honestly I think the overload on the generator would kick in before you actually damaged the plug/receptacle.
The main reason why I put a 14-50R in instead of a 3rd 6-50R was so I could hook up a house or an RV to that plug if needed, like if I wanted to power a neighbors house.

Also you can get a ton of adapters for a 14-50 connection, including the twist lock connecter most portable generators seem to have.
J

yea as I'm finding out more it seems like it's generally accepted that exceeding the rated amperage for a short period is not an issue. I know it's rated for 52a but it's also said on this forum that the unit will send more if the demand is there. My understanding is the unit is capable of surging perhaps to 14.5 kw for a short period of time. That would get it to 60 amps right? My thought was the hookup would be safer if it was more robust.

The long and short of it is, I was thinking it would be a good idea to be able to setup the entire connection at a 60 amp rating but that seems to be impossible without converting to pin and sleeve. Re-reading my original post I can see it is a little confusing.

I do tend to overthink things especially in the beginning of learning about something. I'm also not an electrician needless to say haha.

I'm curious, what kind of load do you expect your house to put on the set?
Have you gone through your major loads and added them up? or better yet put an actual amp clamp on them.

This is what I’m going with, there is a thread further down. I had the same OCD issue potentially pulling 60 amps from 50 amp plugs. This plug is rated for 60 amps.

That's the continuous duty rating for the breakers, wiring, and plugs, not the surge.

The breakers are going to be a thermal trip type, which means you can do heavy surge loads on them for short periods of time without them tripping. It's done on purpose specifically because of startup surges.

Now, if you plan to pull 100% power out of the generator for extended periods of time, then going to a 60 amp or greater setup makes sense. Or if you plan to move to a larger generator in the future and don't want to have to upgrade wiring later.
For 99%+ of the use you will put on it with a house, the 50 amp will be more than sufficient. If you're running it at full load, it gives you zero wiggle room for startup surges of appliances and whatnot.

As a standby generator tech, I've only ever seen a couple people overloading generators. Primarily it's people that sized the gen for their loads, then decided since it's not running at max load all the time, they can keep adding additional loads. This usually doesn't end well for the generator, but those civilian generators aren't overbuilt like these units.
J

I'm probably going to force myself to be practical (painful) and go with a 50 amp setup.

jwhite9787 said:
I'm probably going to force myself to be practical (painful) and go with a 50 amp setup.
Click to expand...

I went with 50 amp plugs & receptacles for price and availability. I used the money saved from pin & sleeve to get heavier wire where it would fit: 4 gauge instead of 6 gauge, Type-W instead of SOOW. It's not perfect, but it gives me some piece of mind.

Crazy idea, what if you installed 2 50 amp receptacles on the generator and just ran them in parallel?
Just tie them together at your transfer switch.

Not sure if you plan on using this set for anything other than home standby backup power but having another outlet can't hurt right?
P

These are really nice too: 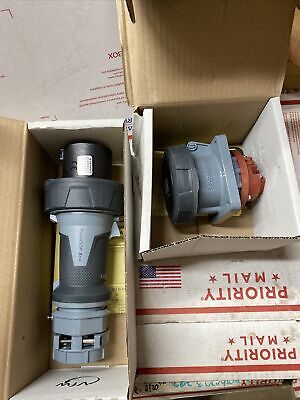 See pics for actual item(s) you may receive. Shelf #I3A ElectricDealsForYou Item #9081. I am happy to drive to catch the Regional Truck if necessary; mileage fee will apply. (Based on availability. ).
www.ebay.com

Definitely on the pricey side.

pclausen said:
These are really nice too:

See pics for actual item(s) you may receive. Shelf #I3A ElectricDealsForYou Item #9081. I am happy to drive to catch the Regional Truck if necessary; mileage fee will apply. (Based on availability. ).
www.ebay.com

Thats actually a great price for a set. We pay a lot more than that for just one.
P

I went ahead and ordered that set after researching pricing some more on those Hubbell type connectors, and that is actually a good price.

Came in yesterday. It almost fits in the outlet hole with no mods:

I'm thinking the easiest way to retrofit this receptacle, is to fab up a flat panel with the same bolt hole pattern as the 4 outer holes in the OEM piece and then use a holesaw? to cut the ~ 3.25" hole in it although I can see that being a challenge.

I wonder how much a metal fab shop would charge to make a panel like that for me out of 1/8" aluminum?

I'm very impressed with the quality of the made in Germany Mennekes plug and receptacle!
M

Here's what I did:

Thanks for the link @m32825 I knew I had seem something in another thread. 1/4" aluminum it is, and mounted on the backside.

Or, I might try recessing the aluminum plate inside the existing housing to keep it as recessed as possible. Something like this:

Interested to see what you come up with, that is a sturdy looking connector!
J