OK I have decided that I must go with AGM batteries in my HMMWV some of the reasons are,
#1 reason my wife's (41 years now) butt shall not sit upon a hydrogen bomb! (yes I know an AGM can gas off but it is much less likely)
#2 plan on stashing some of the electronics ( rear winch relays for one) in that compartment so the corrosive nature of the flooded cell batteries and the above explosive nature shall be avoided.
Because of the winch and the fact I am a radio guy and plan on having mucho radio gear on board dictates to go with the largest reserve capacity etc, is why I am looking at the Odyssey PC2250ST as it has the best specs that I have found, (It appears the Odyssey is at the very TOP of the battery food chain please correct me if I am wrong!) so they are good at stating the good, I just want to know if anyone has had bad experiences with them and possibly a preferred seller, I have found them at several retailers for around $570 ea. shipped.

Cheaper to relocate batteries. For 1200 clams you can relocate the batteries to rear compartment or a rear seat.

Great batteries but not at 600 clams. Get the civilian versions.

And that would be???? I thought the Odyssey WAS the civilian version of the Hawker... I was asking about value but "that's too much for a battery" was not what I was shooting for Yes it is allot BUT when you are in the middle of BFE and your truck will not start....
If one starts out looking for the cheapest item that is what one usually ends up with.
Life is too short for cheap crap...
I can go on and on...
SPEAKING OF CHEAP,,, DURAMAX'S in Houston, if you don't mind a little mud in the cylinders!!

Odyssey and Northstar brands are both at the top of the battery food chain from all the research I've done.
Odyssey is probably the best and only real option if you want to maximize the power stored inside the stock battery compartment.


If you want to add another battery box under the rear passenger seat, you could probably do 4 Northstar group 24AGMs for the same price, which would give you a little more stored power.
Odyssey PC2250ST has 1225 CCA, the Northstar has 840.
Odyssey has 126 AH and 240 minutes reserve capacity, the Northstar has 76 AH and 160 minutes reserve capacity.
Since for about the same cost you can do twice as many of the Northstar, it ends up being 152 AH and 320 minutes reserve capacity, and 1680 CCA. The other advantage is if one or even two batteries get fried somehow, you can use the other two to get the truck started, as the 6T battery minimum spec back in the day was supposedly only around 600CCA.
Using the Northstar batteries would be a little more work to set up and wire, but if you're looking at this purely from a cost/benefit analysis,the northstar come out slightly ahead.

Both have 4 year warranties on them.

If you purchase the Northstar batteries through Batteries Plus you actually get a 5 year full warranty on them instead of the 4 year, and an additional 10% off from the mfg website pricing if you order them online and pick up in store (or just go in and talk with them, the local Batteries Plus guys work with me on pricing on stuff all the time, but I use a commercial account)(you have a core charge through batteries plus though, so if you have some old scrap batteries lying around you can use them for the cores)

I don't run any radios or stuff like that, just need batteries for starting power, so the Northstars though Batteries plus are the route I'm planning to take.

You could also set up some type of battery isolator for the pair under the back seat, so that those are the ones running all the radios and stuff, while not touching the power stored in the starting batteries. It sounds like you want to play with radios and winches and stuff out in the boonies, so having 2 sets of batteries might not be a bad idea if you're going out by yourself.


But to reiterate, yes, if you want to stick with batteries just under the seat, you won't find anything better than the odysseys in the civilian market.

On another note, the 31 series battery is a little longer than the 6t battery, but several people on the forums have said they have managed to make them fit in the stock battery location running them different directions, the Northstar version has 1150CCA, 220 minutes reserve capacity, and 100 amp hours. Only have the 4 year warranty through batteries plus instead of 5 like the group 24, and cost just over $400 each, but they are about as close to the 6TAGM specs as you'll get short of buying the Odyssey. (still get 10% off ordering online, so actual price is $370ish before core charge)

Does anyone have pictures of how the group 31 batteries are positioned in the battery box?
D

I ended up replacing my dead hawkers with Otpima batteries and used the 6T adapter plate very happy with the result.

I have read SO many bad reviews on Optima batteries since Johnson Controls bought them out, whether true or not I am not willing to take that chance, I have seen this play out so many times where someone buys out a quality product then just makes as much profit as possible while running the product into the ground, I am only 61 but I have never seen a product improve after being bought out.

Mogman said:
I have read SO many bad reviews on Optima batteries since Johnson Controls bought them out, whether true or not I am not willing to take that chance, I have seen this play out so many times where someone buys out a quality product then just makes as much profit as possible while running the product into the ground, I am only 61 but I have never seen a product improve after being bought out.
Click to expand...

When Optima moved out of USA I moved away from buying Optima.

Buying USA protects USA. Buying domestic employs our brothers and sisters and strengthens our democracy and our citizens.

Well I did flips and twists, lost a little sleep, looked at it from many angles then today I committed and ordered 2 Odyssey PC2250 batteries...
C

while the cost might be a little upsetting, I doubt you'll find any reason to be unhappy with the batteries themselves.

Coug said:
while the cost might be a little upsetting, I doubt you'll find any reason to be unhappy with the batteries themselves.
Click to expand...

One of the employees where I work paid over $400.00 for their Jeep battery because it was in the passenger compartment so I don't feel too bad, that's one of the issues with getting old, I can remember when you could buy a Sears Diehard, at the time the best battery made for less than $40.00

I got them into the battery box last night, they will not go in as the diagram shows as they are not quite square, this puts the handles on the side the hold down grips, this will require some modification to the battery hold down fixture, I will post pics when I get it done.
D

Mogman said:
I got them into the battery box last night, they will not go in as the diagram shows as they are not quite square, this puts the handles on the side the hold down grips, this will require some modification to the battery hold down fixture, I will post pics when I get it done.
Click to expand...

I typically don't mod my Humvees off of stock, but this is one adjustment I made, which I do like and works well. I slice 1.5" wide cuts with the dremel and feed the same width velcro straps. It's as rock solid as the factory bars and eliminates all that extra crap in the way. 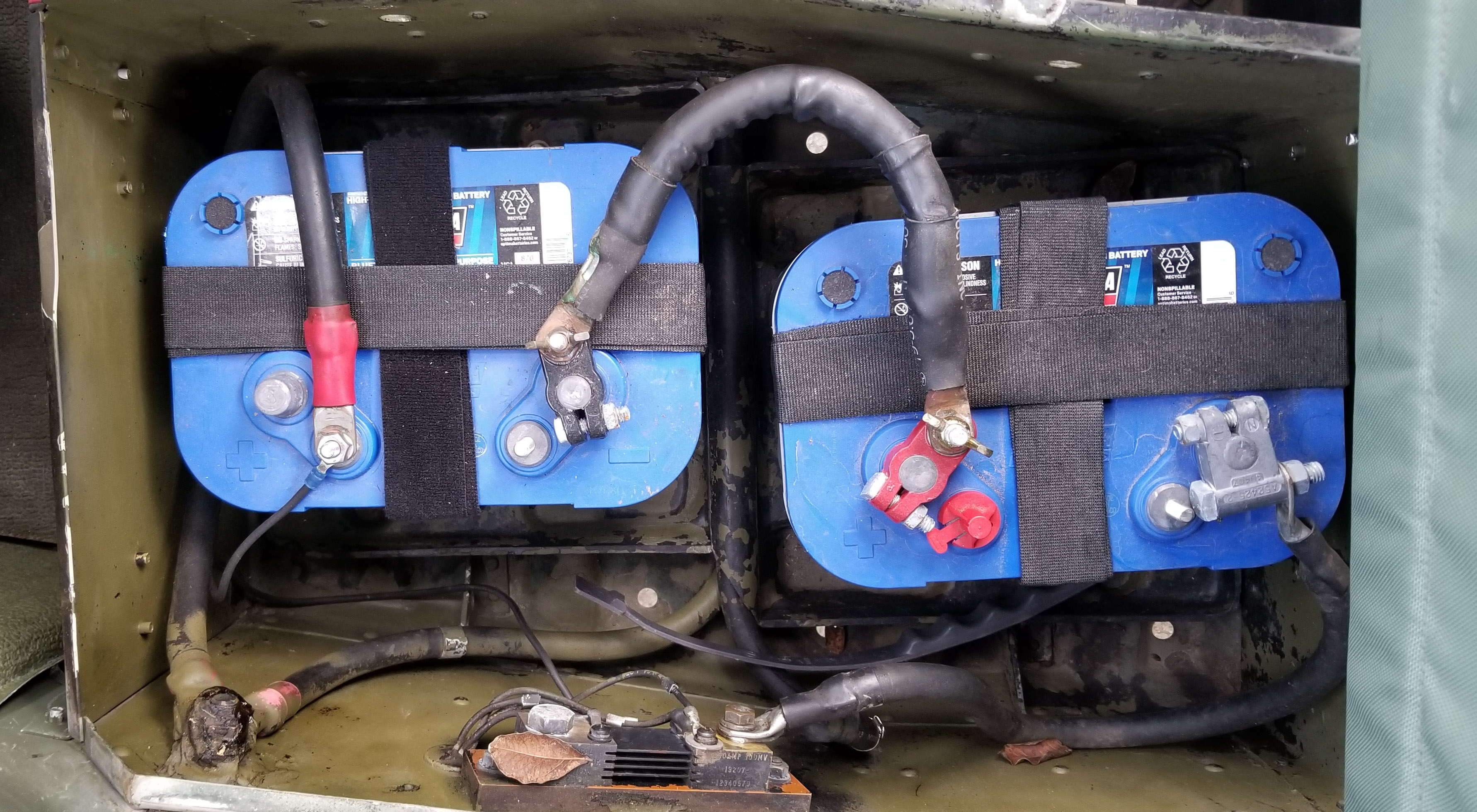 Sent from my SM-N950U using Tapatalk

I notched the OEM bracket, worked like a charm, I decided not to put the battery switch facing the rear passenger, like many before me I removed the slave connector, punched out an aluminum plate and that is where I put the switch.

Funny that I had just posted in this thread about my otpimas and had an "oops".

I was hooking my ibis tek light bar up and I dropped one of the battery hold down bolts and it arc'd against the positive terminal and body of the HMMWV. Had some smoke coming out from the vehicle light switch area so quickly went to disconnect that. All lights work, hmmwv starts, but I think I might have killed the ibis tek controller since I have no output from that now