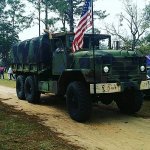 Over the last year my 1971 M35A2 has gone from a beat to heck firetruck to the glorious beast you see now. After many trials, shady companies and lots of effort she is finally almost complete. I say almost because we are never done working on these vehicles, and I'm proud to have a project that will outlive me.

Whether it's car shows or group events I love taking this truck anywhere and everywhere.

Whether it's car shows or group events I love taking this truck anywhere and everywhere.
Click to expand...

Your truck gets my vote, Jon. Now everyone else needs to jump on the bandwagon!

General Non-Sense entered into the scene a few years ago as a truck a friend owned and wanted gone. I took it to Durhamtown, tried to sell him for what the owner had in him and got no nibbles. I came home and decided that I could go to work on a Monday which I previously was unable to do after a Durhamtown trip in my Deuce. I sold the Deuce and became the owner of a bone stock never really touched M923A0. My boys were excited and thanks to friends on here, General Non-Sense attracted a Legend of a truck from Columbus, Ga to attend a Leesburg Spirit of Christmas Parade. Papabear and crew came down with "Proud American GunTruck" and were obviously the star of the show that day but General Non-Sense retained operational control of the event. Shortly after that I made a trade with a gentleman on here in North Carolina to get some new tires for exchange for the wheels and tires that were on the truck. I made a fun trip with a member for the ride and install once we got home. Now the truck looked tough as evidenced by the last few pictures. General Non-Sense attended a Vietnam Veterans event at a Church in Americus to round out these photos. He's not period correct for that crowd but they still love seeing a tri-color camo truck and they know he's a Veteran a mile away.

Years have gone by since I first got the truck but I'll try my best to summarize these pictures. Leesburg Spirit of Christmas Parade which he has attended every year since I got him, line up in my yard in 2017 (he has friends), Briggs 10th Birthday (He wanted to ride to the train museum in a truck powered by an 855 train engine), 2018 GA Rally group picture, Christmas Tree Mission the day after Thanksgiving 2018, HMMWV Towing Mission in January 2019, Flag Mount fitment in November 2018 at member Welder1's shop, a sticker that thankfully did not get put on my wife's Tahoe (Did I mention my son love's trains?), 73M819 loading a engine stand in him at the 2015 GA Rally because who doesn't miss Ron, My youngest son at Ron's Memorial stating that this is not a day to be sad and finally General Non-Sense attending a Vietnam Welcome Home event at the local Zoo last month. This truck is worthy of your consideration, he's touched quite a few lives and continues to soldier on 35 years after he was manufactured. I have hundreds of pictures of him participating in local events and I always preach the positive side of Military Vehicle ownership. Like anything un-necessary, my better half reminds me that I'd have a few more dollars in the bank if I didn't keep stuff like this around. I always remind her that the smiles on my boys faces and the stories Veterans share with me after seeing this truck are priceless. I'm one myself, OIF I and III.

When I see Kids an young Adults interested in participating in MV Events and helping their Parents and Friends doing some of the hard work that it takes to keep the equipment in Top Form just makes me PROUD.

For Sure it is a Family oriented Hobby. Go sandcobra164!
C

And Good Luck to All Participants! And Thanks for keeping Our History Alive! 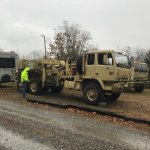 Voted, best of luck to you all!!

I got into MVs several years ago. Although I hadn't had much in-person experience, I was nevertheless somewhat familiar with them.

A friend (Who isn't online at all) who had about a dozen Deuces and 5 tons hired me last July to house-sit for him and do some other projects/duties as assigned. Upon turning 18 in December 2015, the first thing I had ever done on my own was go visit him and climb around on his trucks.

I got to drive and work on his trucks quite a bit. One day, while perusing one of the M939 series 5 ton Facebook groups, I came across an ad for a decrepit M928A1, water in the oil, painted fire engine fluorescent day-glo yellow. Immediately messaged the guy. Long story short we got to talking via Facebook Messenger and I put a deposit in on this thing. As it turned out, he was a fellow member here (Forget the username) and had known of me for quite awhile, including my aspiration to finally get a truck.

And so I set out to buy a non running M928A1 in Oklahoma as the first vehicle I ever owned, as a 20 year old college student that still didn't drive legally on my own. Between standing up walls on a framing crew, I would be messaging about this thing. I didn't dare tell anyone, despite being around several "Army truck people".

I contacted fellow member 98G and he put me in touch with fellow member Lindsey97, who went and inspected this thing. One evening, I returned back to the place where I was living at the time, which had sketchy at best, slow, 4G cell phone service only really usable with a booster, and had my phone go crazy in my pocket with something like 50 photos of this thing.

I was payments on this thing because the seller is super generous to me. I couldn't believe I finally had a 5 ton, or was about to. Next thing I knew, my stint house-sitting and doing carpentry and assisting with someone's bible boot camp event for troubled teens on their remote homestead was over.

This whole time, I'd been talking with another member, located in Fairbanks, Alaska, where I have been attending college. I anecdotally texted him on layover at the airport in Anchorage that I'd be in town that week before classes started (It was late August, I first found out about the truck on August 1). I get a response back offering a ride from the airport. I take him up on this, and we meet for the first time in the loading zone at Fairbanks International Airport. Couple nights later, he brings me over to his home to "meet" his M923A2. We got to know each other real well that fall and became close friends. I will omit details here for obvious reasons but suffice to say they ended up offering to rent me a room, I was looking to get out of the college dorms, an offer I gladly accepted. I somehow doubt if it hadn't been for a mutual connection to these trucks it would have happened the way it did.

Around this time I finally got this M928 paid off. Plans were made to go recover it, but an emergency prevented that from occurring as planned. I contacted the gentleman I bought the truck from and offered to sell it back to him or scrap it if it was in the way, since it wasn't going to be able to move as soon as hoped. (Another small crisis was brewing, preventing me from hardly even paying tuition and fees; it was a story about near-eviction from campus housing that resulted in my present living situation being offered to me).

The guy I bought her from responds with (And I will never forget this text exchange, Verbatim:"

I about cried myself. Not even sad, just emotionally moved. I was told the truck was fine where it was, it wasn't hurting anything. Life hasn't been kind to me at all in the last few months in terms of surplus time or money, so she continues to sit.

In talking to people, she has become a charity case- I have had many offer to help donate time to get her running, as well as discounted parts. She needs a lot of work but she's an oddball and was crying to be saved. She has indirectly introduced me to several other people and has helped me get well-known, being she stands out like a sore thumb even among trucks: Everybody knew what trucks she was, she had been for sale a few times in the past.

Getting her titled was a little interesting. In frustration I put her up for sale in the Facebook groups, and within short order was getting barrages of Facebook Messenger exchanges encouraging me to keep her.

That is the tear-jerking story of my M928A1. Photos by Lindsey97. I still need to go pick her up and it's driving me crazy! There have been days I've considered scraping this thing or cutting it up for the axles but I'll never be able to actually bring myself to commit such a blasphemous act. .

Good morning all your MV enthusiasts.

This is our 1977 MAN Kat I 5ton mil glw Typ461.
This truck is powerd by a 12,7 liter Deutz V8 aircooled Diesel engine lokated at the engine compartment behind the seats.
256 hp .

Side mounted 6ton winch which allows you to get the steel rope out at the front or the rear.

We purchased a stairway and troop seats this year. Now we can take 16 additionell family members and friends for a ride.

and this is the view thru the gunring to the gunners step.

Thank you for voting for this MAN 5ton this month.

Changed the air cleaner insert a short while ago.

Just have to camo cab

Vote M35A2 this month gentleman and ladies! I know a Deuce never wins out against a Jeep or a 5-ton but let's try.

More pictures of a Wonderful 5 Ton spending time with his family, both iron and people! Mrmag, my 5 ton feels your pain when it comes to Jeeps winning. General Non-Sense even has to live around the only CUCV to win MV of the month!

I always have wondered how the Long wheelbase rides. What do you think Coffey1?