Welcome to the MV of the month poll sponsored by Consolidated Press. If you need decals, magnets, stencils, or anything printing related, please give them a call! 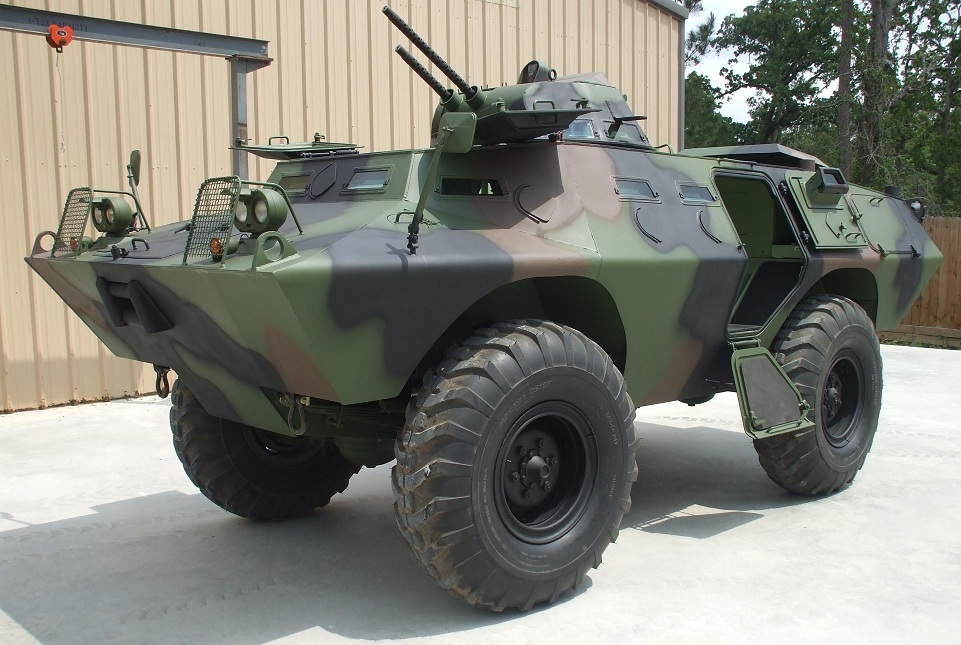 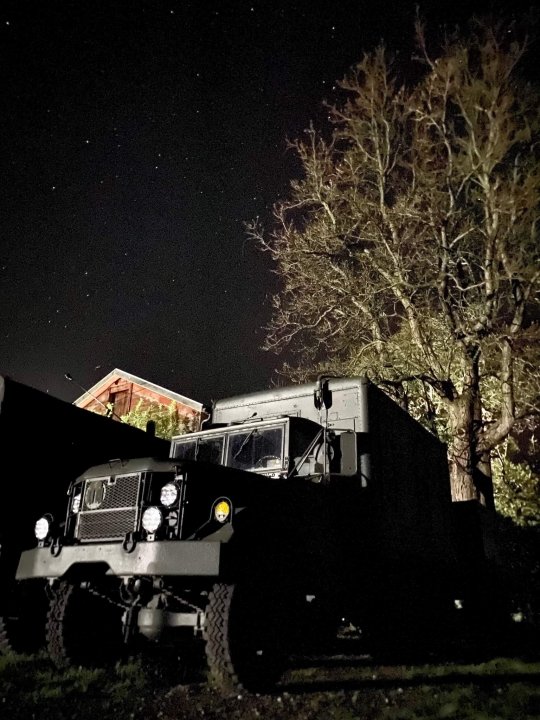 A little of the known history of my V100 -
She is a fairly early V, as evidenced by having two vision blocks/gun ports ahead of the side doors, later Vs just had one there.
She was originally part of an ARVN contract, thus set up with a .30/.50 turret; and built in Feb/March 1968.
Experience with borrowed ARVN V100s during the Tet Offensive in January 1968 led to the US Army commandeering 72 V100s, including mine, off the production line (regardless of who the customer was) under an ENSURE program.
The V was shipped to Vietnam and served with the 720th MP out of Long Binh.
Post war, she served with the Marines in the US as a 'sensitive national asset" guard vehicle.
At the end of her service life, she was a target on a range, and was hit several times.

Recovered as scrap by the previous owner, he began to repair the hull damage sustained as a target, sourcing parts, and putting stuff back together.
I stepped in when the V was an empty hull sitting on its rebuilt axles. Three and a half years were spent gathering parts; some from unlikely places, like NOS parts from a motorcycle dealer in Saigon (some of those parts were shared with Dave/HellonwheelsV100 and JimK), and installing those and parts that camme with the vehicle.
Slowly but steadily various items were restored and installed, things like the wiring harness were made from scratch, bits and pieces were sourced and put inside.
Finally it was painted as she would have appeared in USMC service, mid-80s.

I did a long winded rebuild thread here on Steel Soldiers. A Vietnam MP veteran, Louie from Chicago, followed along, then showed some pictures at one of his MP group reunions. He asked me if some of them could come visit and look at it. I told him "Of course, come look at it, and drive it!". So they did, and had fun doing it. I learned more from them about V100 operations in that one day than I had in the previous 20 years.

I was invited to bring it to the groundbreaking ceremonies of the Texas Vietnam Veterans Monument at the state capitol in Austin, and from there to escort the M35 gun truck carrying a replica dog tag for each of the Texas servicemen who died in Vietnam (some 13,000+) to the foundry in Bastrop that was making the statue. The dog tags went permanently inside the statue.

It is not the easiest or most comfortable vehicle to drive, but it is the one I am happiest to be driving.

Voted, best of luck to you all!

I saved/used as many original V parts as I could, rather than use NOS parts. A lot of these are generic military items used in many different vehicles, but I wanted as much V100 originality as possible.
This first aid kit bracket came out of another V100 (mine didn't have one in the parts boxes). I straightened the dents on it, stripped it to bare metal, primed and painted it, made a retention strap (yes, my mum taught me young to use a sewing machine

), and with a first aid box donated by Dave/HellonwheelsV100 installed it inside.

Some items, like the spent brass/link collector that goes under the guns, proved impossible for me to find an original of. So based on what photographs I could find, and the little diagrams in the parts manual, I made a replica of the .30/50 collector. There seem to have been multiple variations on these, not all of which are shown in the manual, so I just picked one to replicate.

Below are a picture of one version of an original I was sent, and my copy based on the parts manual illustration. The collection hose size seems to have varied too, mine is matched to the top of my original brass collection can.

All 3 are nice vehicles, but I gotta go with my homie on this one. I saw Rory's V100 the first time it was driven during rebuild. I got to watch it being completed, and participated in several parades/displays with it over the years. (I also may have contributed to the nickname). Then there's the story of building a bushing for the bellcrank on the shift linkage.......
We've had some interesting adventures.

Scott/Reloader64's comment brings up the nickname, which is Nessie.

When I first started working on the V100, I was very optomistic about how long it would take to get her done, turns out I was off by about two years!
A while after I had met Scott, several of us were sitting in a group when he asked about how the V was coming along and when he was going to see it. At that time, all the V100 work was being done in Earl's shop, which was around 100 miles from home. I told Scott I'd hopefully be done in about six months. His response was that he heard that six months ago, and that the V100 was starting to sound a lot like the Loch Ness Monster - much talked about, but seldom seen. Another friend said "Oh, it's real, I've seen it!", to which Scott replied "So you say you saw it once, and Rory claims to have caught it. Sounds a lot like the Loch Ness Monster to me!"
Not long after that, I asked Scott to go on a road trip with me -
"Where are we going?",
"You'll see".
We went up to Earl's and I introduced him to the V, which we then drove on its first outing under it's own power since the restoration began.

Subsequent to this, my daughter (who is artistically inclined) painted a small Loch Ness Monster on sheet magnet and cut out the picture in several sections. This now gets stuck somewhere on the V, with a different location on each outing, and folks have to look to find it.

The V bellcrank issue - we were coming back from an air show in convoy, and stopped for some chow. I found on downshifting that the V was now stuck in second gear and the shifter refused to move. Second gear with clutch in, second gear with clutch out, that was it. I pulled into a parking lot, and the fellows then pushed the V backwards into a parking spot. We discovered that one of the bushings on a shifter rod had broken and jammed everything. Keep in mind that the transmission is in the rear of the vehicle and the linkage rods are all about seven feet long (two meters to you metric folk), so any slack gets magnified into major issues. Scott's shop was about 25 minutes or so away, so we proceeded over there, made a new bushing on his lathe, came back, cussed because it wouldn't fit, measured everything again and repeated the process, except that the second time the new bushing fit, and we were on the road again. This all took until about 0300 in the morning, though.
The long shift linkage on V100s was an issue all through their service life, and its eccentricities meant that they were never easy to drive well. It is also why the improved version, the V150, had an automatic transmission.

I'm not much of a painter but I would like to have a booth like that, that is one nice MV, I could piss the neighborhood off with that.

reloader64 said:
All 3 are nice vehicles, but I gotta go with my homie on this one. I saw Rory's V100 the first time it was driven during rebuild. I got to watch it being completed, and participated in several parades/displays with it over the years. (I also may have contributed to the nickname). Then there's the story of building a bushing for the bellcrank on the shift linkage.......
We've had some interesting adventures.

I NEVER thought I would here Rory referred to has a HOMIE !

That alone sounds like one heck of a campaign nickname worth its weight in some GOLD BLING ! ! !

Thanks for the chuckle, Scott.

Well, I usually wait a bit and let my ol' twitchin' votin' finger wiggle a bit before casting my ballot.
But alas, that finger flew into to full-fledged SPASM-MODE and the vote has already been determined this month.

Some toys just make me DROOL beyond any measure of control.

Best wishes to all our outstanding nominees this month!

Me too! That is Earl's paint booth at his shop. We did most of the heavy restoration work there because of his knowledge and the well equipped shop.

My own "paint booth" is a Rube Goldberg affair of PVC pipe and tarps that I wrestle into submission when needed.

Guess I missed the vote, didn't realize it ended this morning, though I'm a big 151 fan, how could you not vote for the V100, congratulations M813rc. All competition was very respectful, don't forget to roll them back through.

Thank you to those who voted and commented on the V100. That vehicle took 3.5 years of my spare time, and was a labour of love.