Welcome to the MV of the month poll sponsored by Consolidated Press. The winner each month will receive a one of a kind decal with their win! If you need decals, magnets, stencils, or anything printing related, please give them a call! 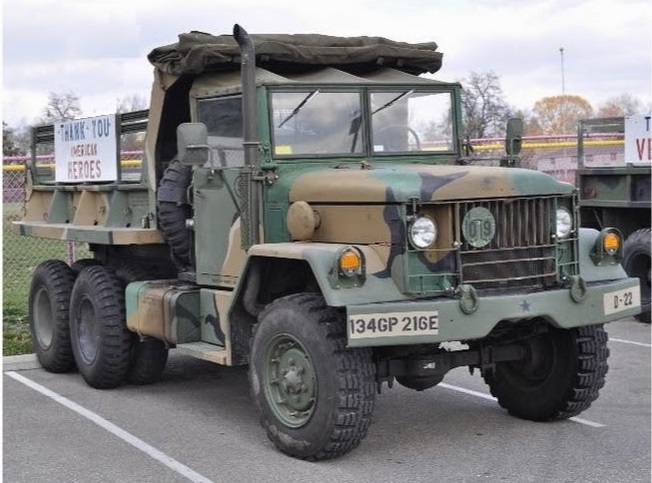 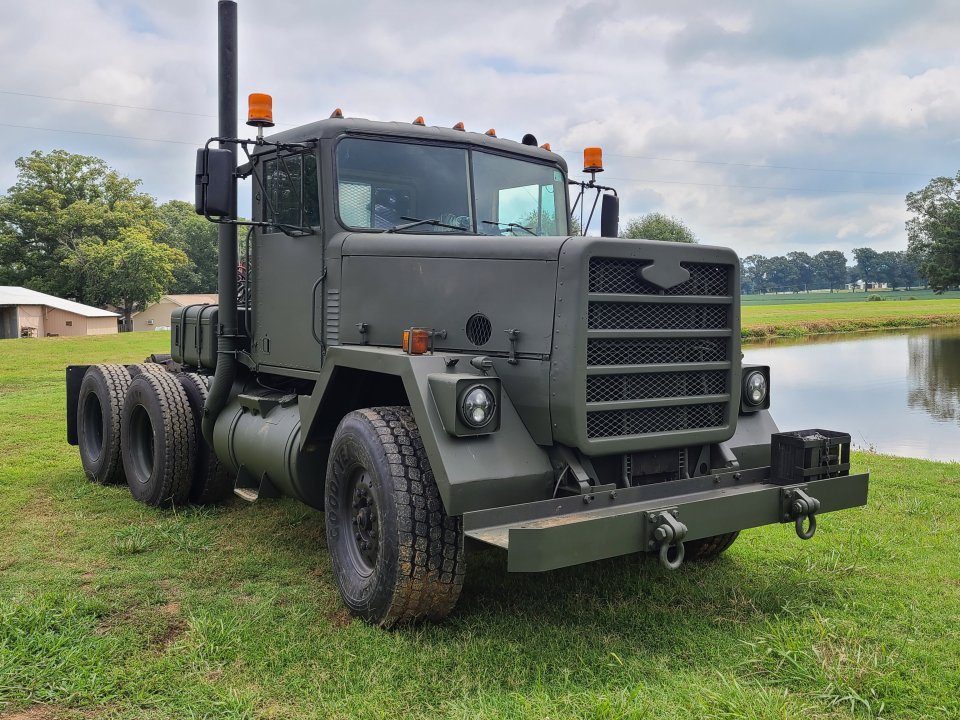 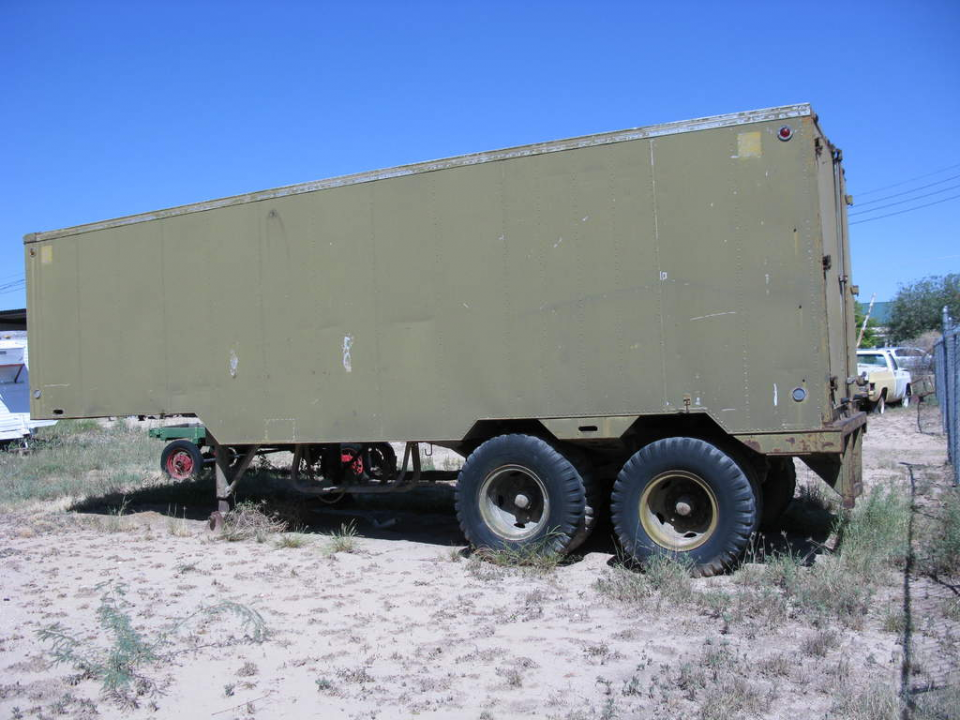 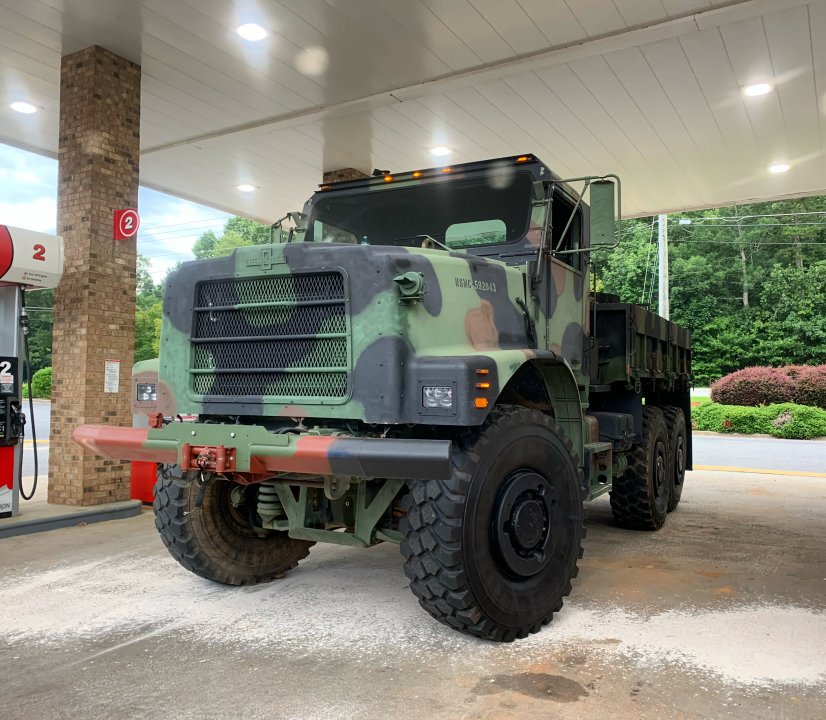 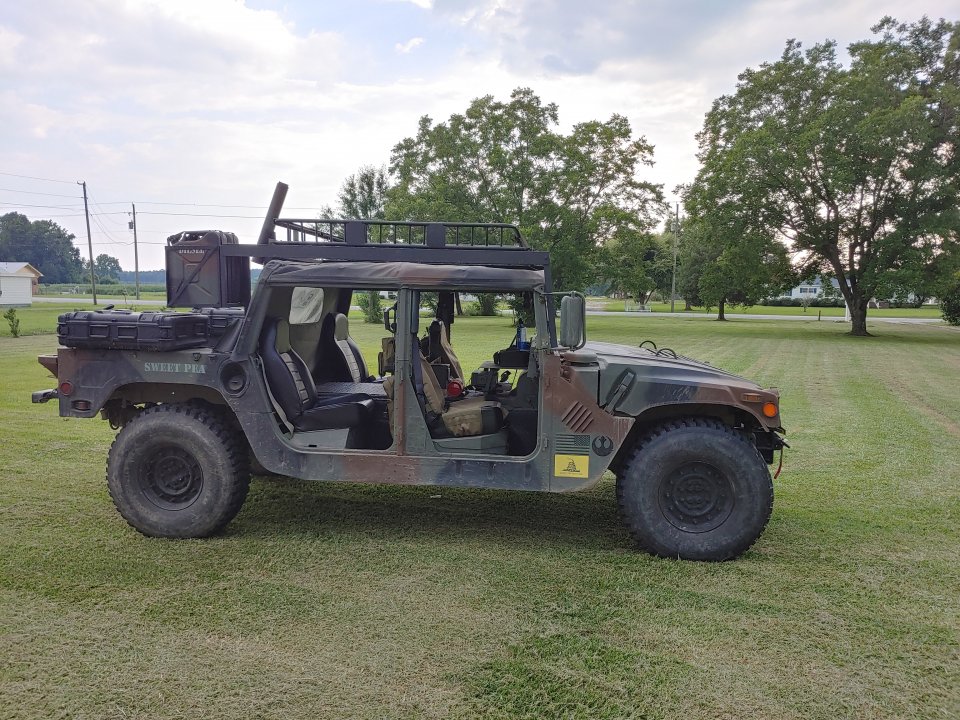 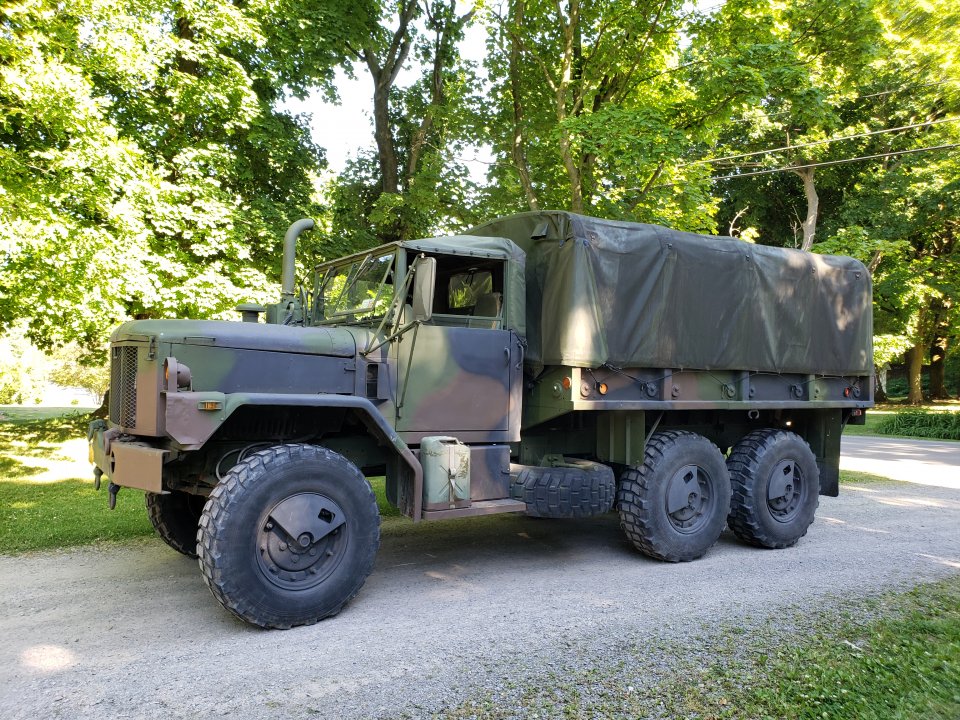 Again, I quote from the campaign a couple of years ago......

This restoration is a work in progress.... Very, Very SLOW progress so far.


She's currently parked in our back yard in such a position that photos worthy of posting are nearly impossible to be had. We have not done much toward her restoration yet as she's currently serving "dry storage duty" for various tools and equipment.

These photos are "as found".

The interior of the 220KAK is seemingly ORIGINAL woodwork with the bump-rails and all. Only the right rear cargo door is missing its original plywood inner skin.
The oak flooring has been covered with some thin sheets of compressed board, presumably due to wood rot on the base floor planks.

Close inspection of the aluminum roof shows years of west Texas hail exposure with numerous dents.... Battle wounds, of course. Thankfully, the roof is weather-tight. The slight puddling seen on the floor in these photos is because the doors had been left open and we had had a rainstorm the night before.


Branded on the upper interior just forward of the cargo doors.
This number "662" is also showing in very faded white paint on the outside of one cargo door.

She's wired (Original Equipment) for BOTH 24V Mil-Standard Lights AND 12V Commercial Standard Lights with separate circuits all the way to the back where she's got two sets of taillights. I have not yet chased the circuits, but I believe that the corner and upper marker lights are connected to only the 12V system.
As you can see in this photo, the 12V connection box is heavily damaged. I have not yet find a "correct" replacement for a historically accurate restoration.

Built in 1960 by the KINGHAM TRAILER COMPANY in Louisville, Kentucky, USA.

To the best of my knowledge, this is a rather RARE MV to be found nowadays.

Only one other time have I found anything on the internet about a 220KAK. A few years ago there was one that popped up in an GSA-online auction. It was located in Orange, California and was in decent shape for being of the same vintage, although the auction notes said "Rust Damage". The one at auction was 1959 vintage, S/N 31175. Ours is a later vintage but bears the lower SN 21287, so we cannot tell from the SN how many might have been produced.

I have seen some photos of these trailers at ammunition facilities - factories, dockside (both in the States and Vietnam), etc.
They are officially a "Dry Goods Van" trailer, but I believe they were often used as "Sea Containers" for ammunition. Their short bodies and high payload would indicate that the density of ammunition masses in ammo cans would easily rationalize the need for such a compact yet heavy-duty design.
Being wired for both 24V & 12V electrical connections would also indicate "intermodal" functionality.

When we found her, she was languishing in an electrical contractors storage yard. When I inquired about her the old guy told me she'd been in that yard for almost 10 years and had, for the decade or so prior to that, been serving his business as a support/storage trailer at his larger job sites.
Since her undercarriage is all heavy steel, and her superstructure is all aluminum, and also considering her wooden floors and inner skin, the best local scrap price I was quoted was $0 - TOO labor intensive to dismantle!! So, I gave the guy a $400 bid and he bit!!! Not a bad price for a bit of history, huh?

So now, she's awaiting my serious efforts at restoration. We've now also acquired an XM818 as motive power for her mobility. I really have no excuse for not giving her the attention she deserves.

As for my Poll Campaign.... I'm not really expecting to gather many votes. She kinda looks like the UGLY DUCKLING.
I figure that just getting the word out that this NEARLY EXTINCT and yet beautifully restorable MV is still around MIGHT help us locate another of her pedigree... and, if there IS another, that they may breed and produce offspring, too.

I had located some "new" wheels and tires. They had come of an M818 that had gotten larger "shoes" for playing in the mud. These tires still had (and still have) the mold nubs on them. Got the full set of TEN from the M818, which put 8 on the ground under the 220KAK AND a spare in each of the two spare tire racks under her box.

It was a quick PIT STOP on a day I was busy at the funeral home. So I had a local Tire Guy change out the wheels....

Those old tires were toast!

Even the spare tire racks got loaded!

Now ready for the recovery trip (about 4 miles to our backyard) we still didn't have a tow vehicle of our own.....

SO.... Thanks to a local company that specializes in road and highway construction, bridges and parking lots, etc, they literally LOANED us a driver and short tractor, a supervisor for escort, and their lead contract bidder (a personal friend of ours).....

This is why a short tractor was needed on this first arrival to our LZ... She had to be jackknifed through a 21' wide gate off of a 25' wide alley. That's a pretty good trick for a 26' trailer! Our borrowed driver did it in just ONE SHOT!!!
NOTE: This trip was LEGAL - You can see the white ONE WAY TRIP PERMIT taped to the back bumper bar.

A good shot of how tightly our motor pool fits into our backyard. And our canine corps inspecting the new arrival.
While the movement was technically "LEGAL" the trip, which was done mostly on neighborhood streets, did not include any trailer lights (the 12V connections FUBAR) and the Glad Hands had been sheared from the forward bulkhead, so NO BRAKES!
NOTE: The brakes DID NOT need to be caged for this trip. Being a 1960's vintage trailer, the brakes are DISENGAGED when "relaxed" and require air pressure to apply the friction between the pads and drums. This is OPPOSITE to more modern and SAFER brake design standards.

Note the faded "662" on the right rear door. And the rear lighting is noteworthy as well: both military lighting and commercial lighting can be seen here; along with the upper marker lights and the center 3 being skewed to allow for the upper door latch anchorage.

Hope that helps to sway some voters!

We had considered modifying the 220KAK into an "rolling palace" complete with windows, RV-type entry door(s), and all the comforts of a travel trailer. However, once we realized that we'd be butchering what may well be the last of her species, we have decided to keep her as original as practical - WITH safety grades, and restorative paint, etc..

To deploy her as a camping/bug-out-ready toter is now the plan. She's got lots of room to bed down inside if we're "on the run", yet carrying capacity for just about everything including kayaks and ATV's.

The 220KAK has a name as well!
We call her THE FOLLOWER.

All of our MV's have faith-based names:

Our DEUCE was our "first born" into the motor pool. We christened it THE ARK... Our original "bug-out" vehicle. We thought that name summed up her secondary purpose as a vehicle for surviving a "world class" catastrophe with our household of (at the time we got her) two adults, a teenager, and 6 dogs & 8 cats. (We're now just 2 adults, 4 dogs and 2 cats.) (UPDATE 8/16/20: now still 2 adults, only 2 dogs, and holding at 2 for the cat-count.)

Next came the M105 trailer. She's called THE RAINBOW. If you check out the Biblical story of Noah and the Ark, it was the RAINBOW that followed that epic event - a sign of God's promise to never again destroy the earth by flood. (Please note, HE never ruled out using FIRE next time.) For our purposes, THE RAINBOW will indeed be right behind THE ARK if we ever necessarily bug-out.

I just love an "ugly duck"

12k WARN winch, surplus server cases modified and affixed to bed haunches for additional storage (land anchor and other recovery gear). Fabricated a roof rack, wired back up lights like the ambulances have by utilizing a tractor solenoid on the shifter and tied it into the gear selector light.

New LED headlights and indicators, VT plates to get out on the road. Taking it to the Outer Banks to drive on the beach in October with the family.

Its gonna be a tough choice this month. I like em all!

Repainted entire vehicle inside & out. I used to think it would be fun to spray paint a vehicle camo. I was right.

Got a Pfizer parking permit so I can get on-site. Always fun to roll through the gate in the 7' wide camo HMMWV rumbling like a ticked off Rhino.

In May, we partook in a drive-through Mother's Day parade at the retirement community where my Mom is quarantined. It was a big hit; saw some vets with flags and gave them a horn double tap salute.

915 showing off its glamor work

Can you go ahead and bring me one of those Stewart & Stevensons?

My 1995 AM General M35A3 is my first army truck. I don't intend to mod it other than eventually getting it a fresh coat of paint and new tires. Mechanically, it's the same as when it left the service besides the air pressure relief MWO (it was somehow missed in-service).

I'm trying to decipher the bumper numbers. They're black letter stickers that were painted over by its first owner, which probably helped a lot to preserve them! I know the truck's registration number is PS 220 for sure. But this is what I have for everything else:

If anyone has an idea of what these actually are, please send me a PM

Hear the truck from the cab:
There are other videos of the truck on my YouTube channel!


Purchased this truck and dragged it home in July 2006.

This truck is not just a show queen, but gets worked like a truck too!

That's a gorgeous dump truck! I love that you have the bows and tarp for the dump box!

Even Papa Bear is having to think this one over!

Pictures from the past weekend of what's probably the only car show in my area for the entire year. In one of them you see how well the camo paint job works It was definitely the biggest vehicle there!

Lot of good campaigning this month, can I vote by mail also?

microjeep said:
Lot of good campaigning this month, can I vote by mail also?
Click to expand...

Last time I entered the 220KAK in the monthly MV competition, as I recall, I didn't even vote for my own MV.
However, this vote-by-mail concept means that this time I can vote for EVERYONE BUT ME.


(This is not a "political commentary" but is intended to be SATIRE concerning the polling in this thread/competition ONLY.)