Strange noise - but from where?

Last Saturday I drove 80 miles with the Goat. No problems. On Sunday, after 1.5 miles of driving, there was a noise which I never heard before. I stopped and made a walkaround. Nothing to see. Shafts okay, engine oil level okay, cooling water level okay. So I continued my drive - with no noise. All gears went in easy. After a quarter mile the noise returned. I stopped again, checked the Goat. Nothing. Went home, jacked her up and still cannot find anything.

All gears can be inserted neatly.

I am at a loss. What can cause this noise? What should I check?

Not that it's necessarily your noise but check the fan belts. I lost the engine on my Goat letting someone else drive when 1 belt gave out and took the 2nd with it and overheated things frying the motor.

mkcoen said:
Not that it's necessarily your noise but check the fan belts. I lost the engine on my Goat letting someone else drive when 1 belt gave out and took the 2nd with it and overheated things frying the motor.
Click to expand...

Thanks a lot for the hint. But the belts are not the problem. Both are there and in good condition. And they go around when the engine is running.

I had the retaining clip break on the clutch release arm, it would hit top of the bolts on the pressure plate, took me a while to figure it out, may be worth a look.

What kind of a noise was it? Was it a metallic clanking noise?

Yes. It was there, sudden. After stopping and continuing driving, it came back. I have the engine at a shop for Detroit engines at the moment. They checked everything but what they found is not the reason for the noise. Perhaps it is the trans or gear box?

The transfer case is know to loose prime and cause upper shaft bearing failure.

doghead said:
The transfer case is know to loose prime and cause upper shaft bearing failure.
Click to expand...

Thanks for your advise. That might be an option. I have a second transfer case to test this after getting back my engine.
A

My transfer case had flogged out top bearings, the noise is constant, it doesn’t come and go.

Because of all the oil in the bay, I had the engine at an engine repair shop for Detroit Diesel in Nuremberg, Germany. The engine came home with new gaskets all around, a new NOS radiator, a new NOS clutch disc and the blower was changed (I had a used one here in better condition). Before and after the engine was on the engine test stand and finally I got back the engine with fresh paint. Looks better then the old girl now 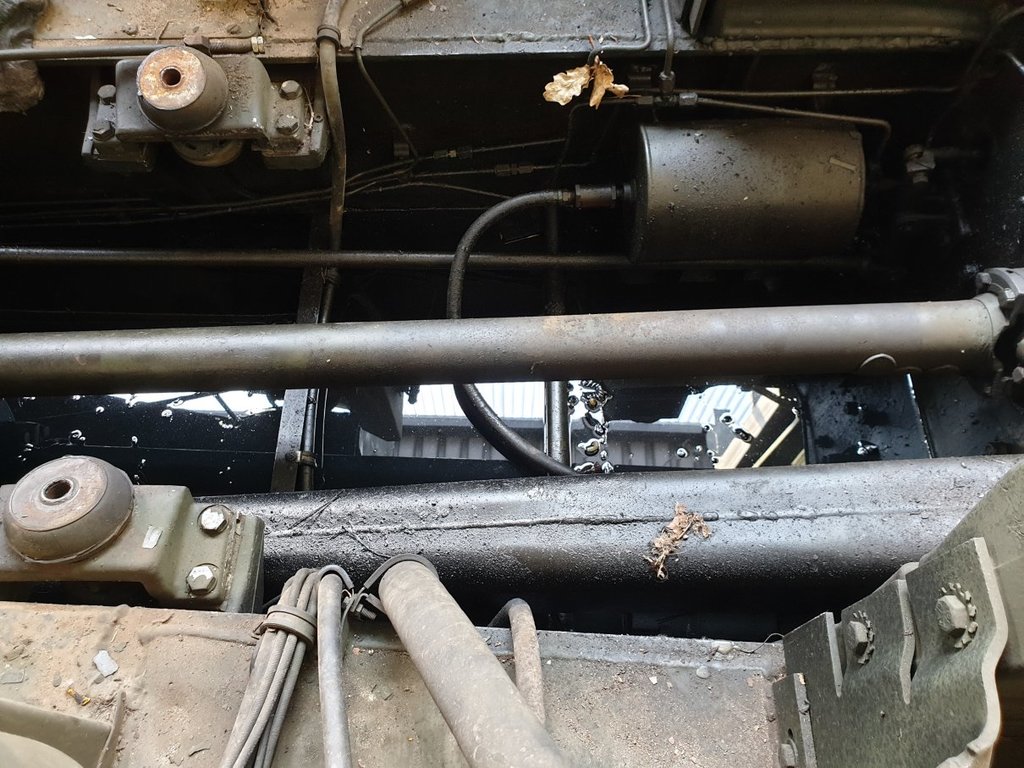 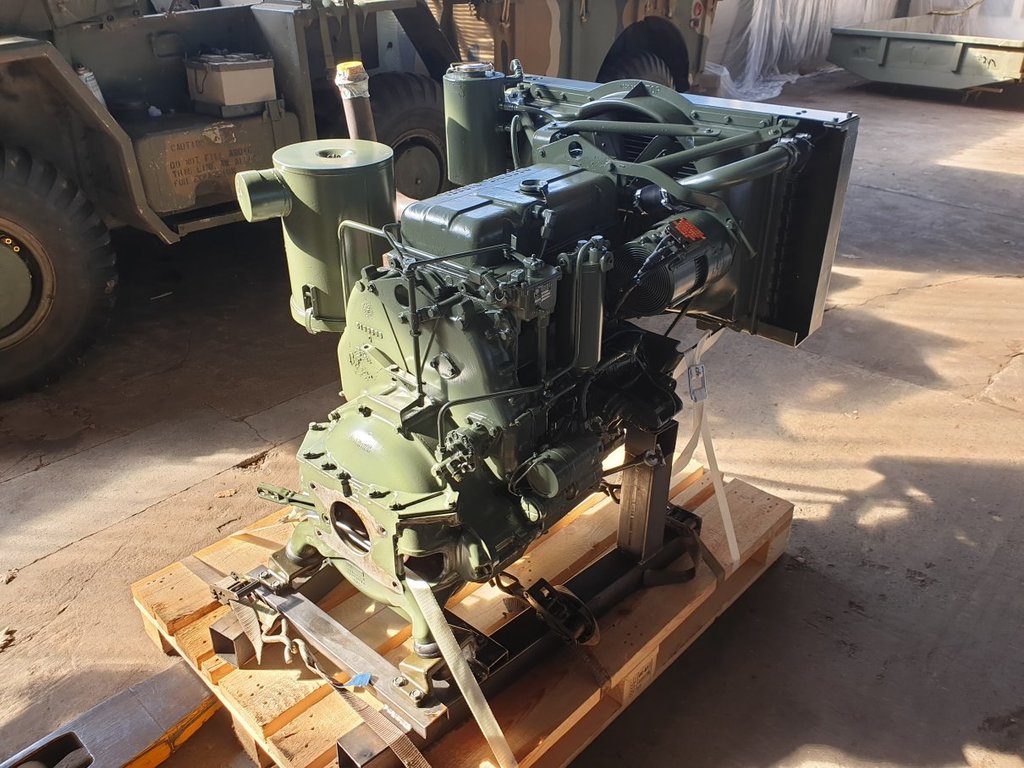 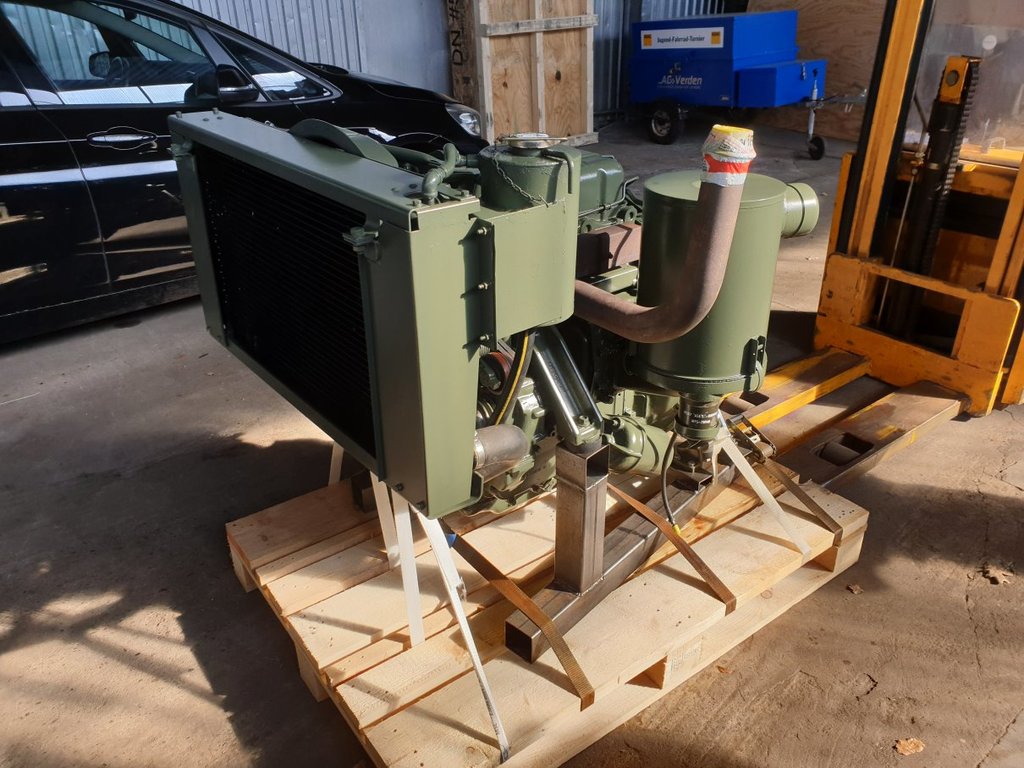 The engine is back in the bay and runs great.

An open issue is still the noise. We installed a clear tube at the oil pump for the transfer case. While the Goat idles, there is oil flow. So this is not the cause. Also the oil level was okay.

We checked the gear box oil. No traces of metal abraison. We filled it up with some oil, but not much.

Next to the center differential. It is a little bit wet with oil but not that much. Also the oil level was okay.

So we made another test ride with the Goat and tried to figure out what went wromh last year ...

The result of the test drive ...

We found the source of the noise. 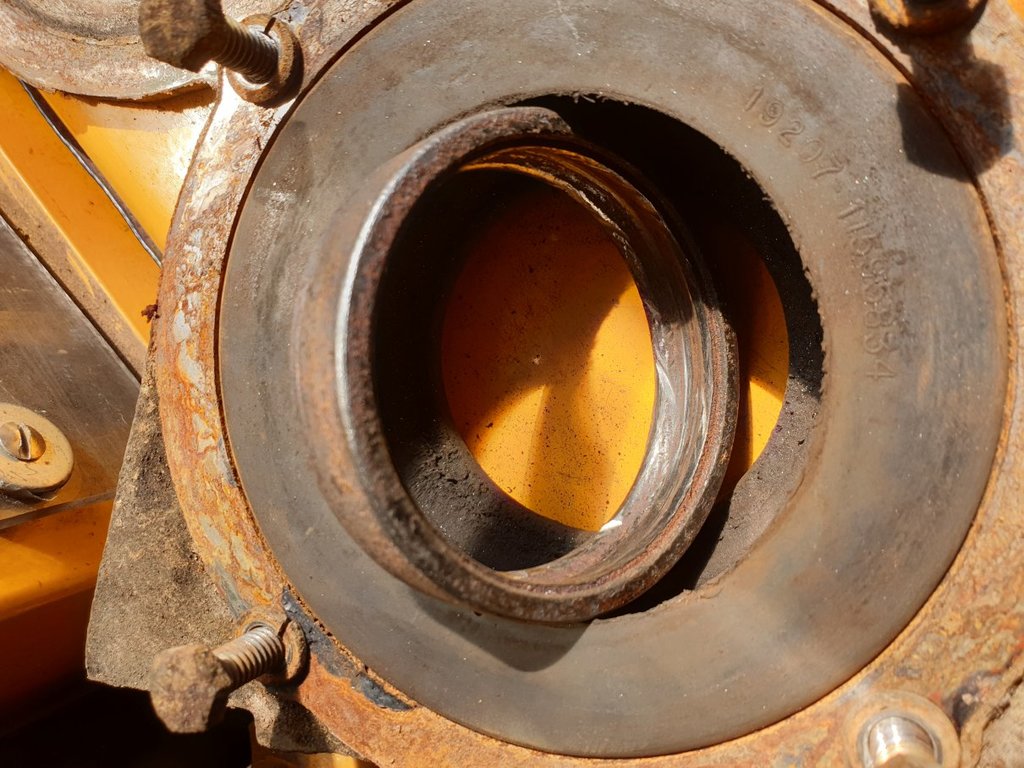 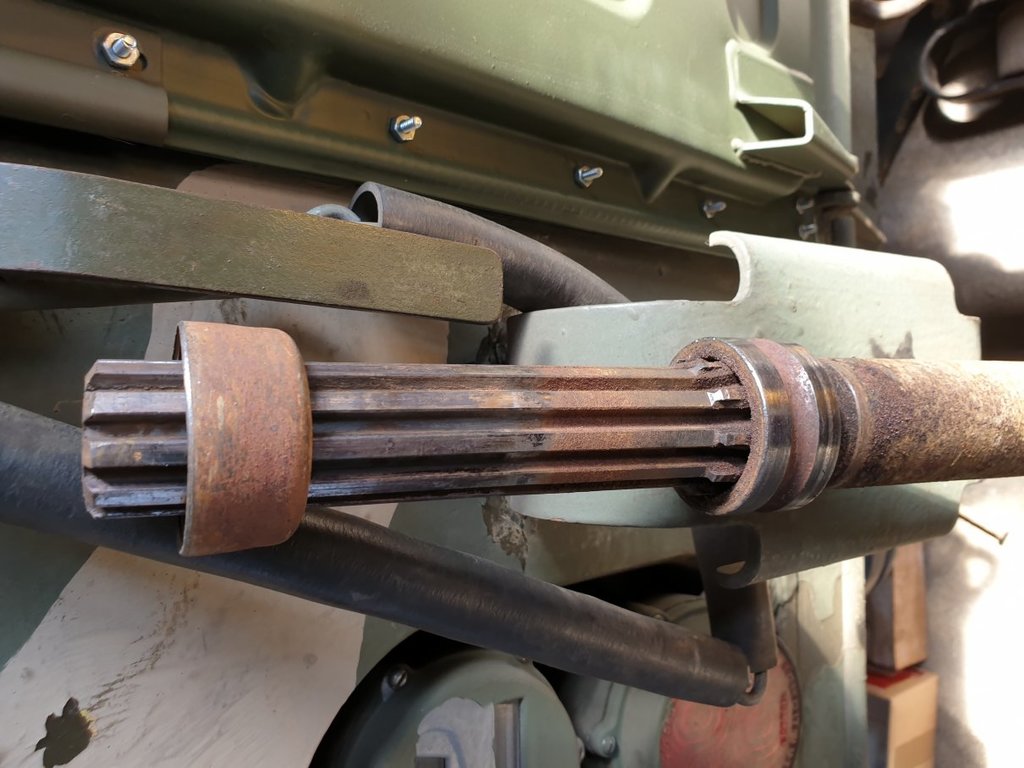 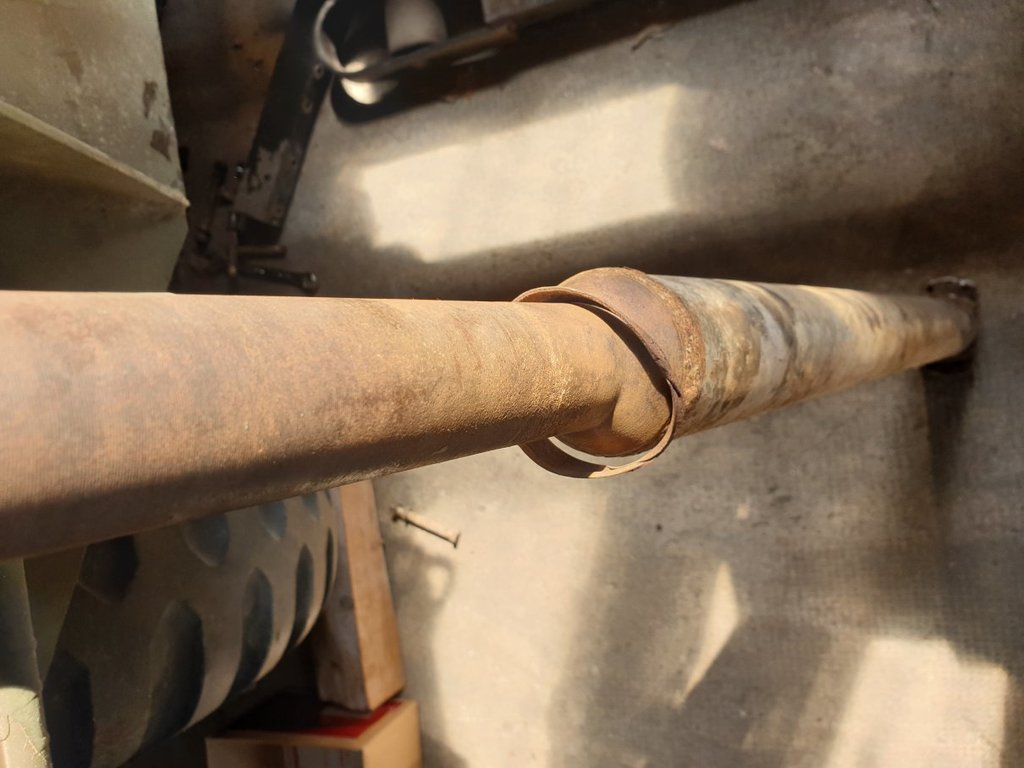 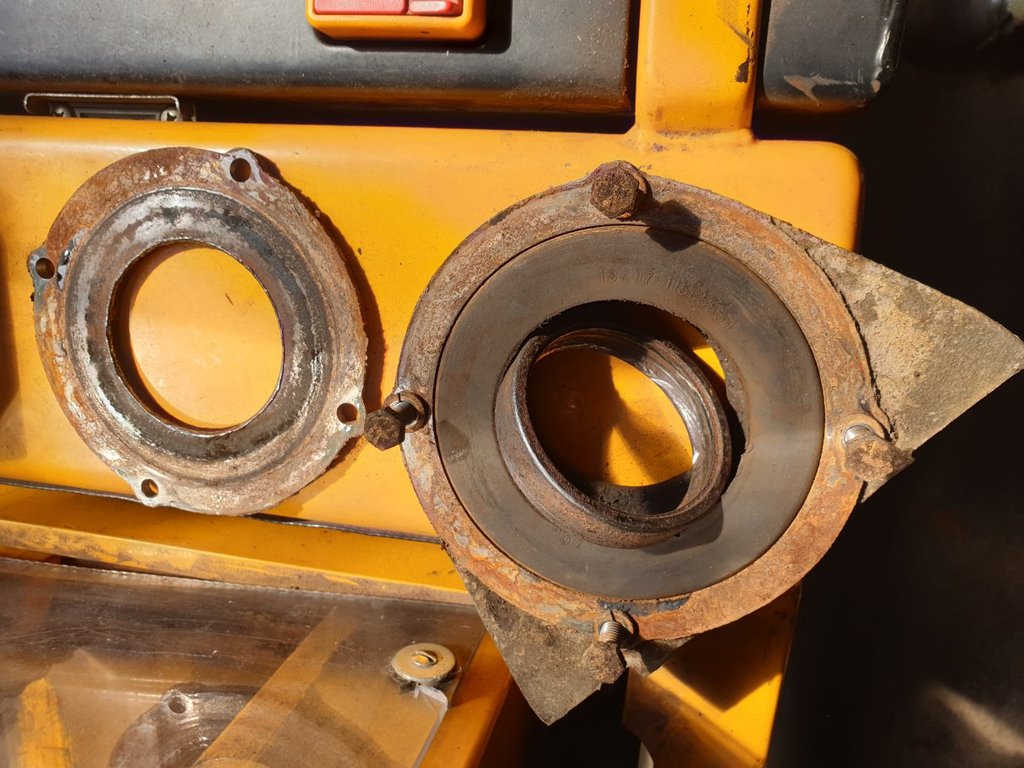 On the carrier's drive shaft there is a bearing in a rubber block. This bearing has broken down into its components. I found a new one that is now waiting to be installed. Unfortunately, the damaged bearing also affected the yoke and its components. I have already contacted Blake from Red River, unfortunately he no longer has a yoke in stock. Does anyone have any idea where I can buy a yoke? If not NOS in a good used condition?

Would be great if you have one for me.