This Sunday I'm going to look at a tank hull. The seller says it's WWII, but the picture looks like it's a M551 Sheridan, to me. Is that what it looks like to y'all?

It's had the turret and everything else removed, the previous owner made a fake turret for his kids, then a few months ago welded it to a trailer and painted it pink for a Susan G Komen marathon, and to use in parades.

Any ideas what it's worth?

Are parts available? I couldn't find much on google. I'd like a turret, but if I can't find one, we should be able to fabricate something better looking. 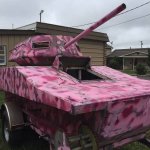 Looks like it's sitting on a single axle 5x8 trailer like you carry a lawn tractor with. Does that tell you anything?

My advice, take it or leave it: It's worth its weight in scrap metal less transportation costs to get it to the scrapyard. Save your time and gas money. Don't bother making the trip to look at that abomination.
G

NDT said:
Looks like it's sitting on a single axle 5x8 trailer like you carry a lawn tractor with. Does that tell you anything?
Click to expand...

Well, this'll sound dumb, but I thought "Well, it is supposed to be made of aluminium, and the steel turret is gone, along with the engine and transmission and everything else..."

But yeah, when you point that out, it does look fake. Ugh. Dude swore up and down it was real.

NDT said:
Looks like it's sitting on a single axle 5x8 trailer like you carry a lawn tractor with. Does that tell you anything?
Click to expand...

That tell me that is one heck of a trailer. Heck , it's got a tank hull on it, tires must be special run flats....
L

At first glance I can see where someone might think "whoa, that's a stripped M551 hull" but like others have posted, it's not. If it were a stripped hull ther'd be a pleathera of bolt holes for all of the accessories that are missing such as the head lights & guards, susepnsion arms & such. The driver's opening on the Sheridan while in the center upper front of the hull like that is sort of round not square. That cog on the lower front which I assume is supposed to be the faux drive sprocket? M551's sprockets are at the rear of the vehicle & don't look like that.

Looking at the welds and the metal thickness, it's a homemade job.

Look at the sprocket on the front- that is a very flimsy setup and is clearly for some sort of light duty tracked ATV. It woukdnt handle real tracks alone much less moving the weight of a real armored vehicle. Same for those tiny axles for roadwheels.

it looks like someone took an older tracked ATV or agricultural vehicle and built a fake tank around it.
L

Another observation is how deep that hull is. The lower front plate on a real M551 is shallower, angled & would have bolt patterns where the recovery shackle bases & front track tensioner mounts would have been attached.

Dang and I was hoping to sell that as a WWII armored trailer. I would have gotten away with it had it not been for you meddling kids and that pesky dog.
L

It would have been really cool if that had actually been a stripped Sheridan hull. Just say'n.
Matt

I know a guy who would be the seller of this "tank hull" if he had it. He made an M2 tripod out of scrap metal (extremely poor build)& called it original. The pintel receiver was two washers welded to accept the pintel on the head of the tripod, not the cast & machined brass part we are all familiar with. He took it to a gunshow & sold it that way for big $$$ to an unsuspecting buyer. I can't stand people like that.

Great job guys on letting the OP that the tank hull he was looking @, was not a real tank hull.
G

Talked to the owner tonight, a friend is trying to sell it for him so this was our first conversation.

He said in the 60s his dad bought it from a farmer. Was told it was a WWII tank, and either his dad or the farmer had made the turret. Then it sat in his dad's field till the 80s, when he moved it to his field, where it sat till a year or so ago when it was dug out and put on a trailer and cleaned up and painted for parades and such.

The turret has 360 movement. There is an engine compartment on the back, no engine. Probably was a tracked something that converted in the 60s. No data plates anywhere that he knows of.

Still going to take a look at it.

I think you should tell him you need to test the hulls integrity. A few 5 tons with m66 gun rings and some 240s/m60s/m2s should be good enough test.

Itll look like that boat at the end of patriots day.

Sent from my SM-G935P using Tapatalk

kcimb said:
Even if it is fake it'd still be a cool thing to hve
Click to expand...

Yea, every neighborhood should have a pink camo tank. Some things really are a waste of money...or worse yet, a liability when a kid gets hurt.
L

tobyS said:
Yea, every neighborhood should have a pink camo tank. Some things really are a waste of money...or worse yet, a liability when a kid gets hurt.
Click to expand...

Funny you should post that. I have an M548A1 in my (fenced in ) back yard and it's not the local Children that I have issues with tresspassing & climbing all over it because they don't. It's the local College Students (& their sense of entitlement) that I have the problems with.....

it followed me home.
Took some better pics of it. My three year old thinks it's awesome, my wife said it's live-with-able, the neighbors think it's cool, and a brazillion people honked and waved at us as we towed it home.

Sprockets are chain-drive type, looks like they were welded together with pipe or tubing. Spindles are in no way able to support weight of actual armored hull; those things look like pipe or tubing of some sort. And now that I see the latest batch of photos, it is absolutely home-made.

That said, what you have is undoubtedly a lot of work someone put forth at one time; that's a LOT of weld beads!! It would make a fantastic project vehicle, you need to put some sort of engine and drive train in there and start running it around. Any possibility of finding a worn-out Bobcat-type tractor with treads you could pick up cheap and use as a donor? Just a thought, but what you have there is very tantalizing and would sure eat up a LOT of weekends of mine if I were closer (and my wife thanks you for not being any closer with that thing!).