I still have two of the LNTV add on AC/heater units for sale. Almost everything you need to cool a deuce. PM for info.
C

Just wondering if anybody has tried one of these types ?
Click to expand...

m-35tom said:
all of you will have issues with the alt pulley slipping. i know, i did also. the solution is to use gates green stripe belts # 9530HD. make sure it is the HD, they are green all over, not just the back side.
tom
Click to expand...

I'll second Tom's comment about the Gates Greenstripe belts! They are sometimes hard to find but very much worth the effort. There's not much wrap on the gen pulley - there really needs to be at least 40% wrap for a high load like a generator/alternator.

Finally! Today I finished the A/C wiring today on the deuce and now I have COLD AIR!!! It almost has been a year, 11 months, since I started this project. Time, budget cuts, yes, I have those too, and a medical operation did their collective best to slow me down. But, I wanted to get this project done before the hot Florida summer sets in. Now I'm ready for it!

I just finished up about an hour ago. I will post pictures and final explanation on the wiring tomorrow. There are several wiring harnesses included in the kit; however, one of them is not needed and one of the connectors that fits into the control panel had to be modified. I put two separate on/off switches on the dash to control the aux fan on the condensor I mounted above the fuel tank, and the other one controls the compressor clutch. I turn both on when I turn the fan blower on at the control panel.

Since my truck has a heater, I did not elect to connect the one internal with the A/C unit. The heater hoses are on the back side of the unit and I could see trouble down the road with potential leaks. Besides, in Florida heaters are seldom needed!

You know we're going to just HOUND you until you do get some pictures up, so....

Awesome!!! Congrats!!! I'm in the middle of this too. Looking forward to pics!
C

I was checking out your pictures this morning. That is almost exactly what I did to add AC. My condenser is a parallel flow unit that is a little larger than yours. I have the same type of compressor. My fan didn't have enough clearance for the compressor clutch so I bent each fan blade slightly forward. I could have made a fan spacer, but the fan fit on a hub that helped center it. It was easier to just bend each blade. I didn't need to add an electric fan for the condenser. I also used an alternative refrigerant HC-12. It is a direct replacement for R-12. The AC gets extremely cold and runs efficiently with lower than normal head pressure.

I did have one problem after the install. The engine would overheat when pulling hard. What I found is that the fan and water pump are pulling enough load to cause the belts to slip on the water pump pulley when at higher RPM. The engine is too noisy to hear them slipping. To fix this, I built an idler pulley that fit between the crank pulley and the water pump pulley. It was tricky to build a bracket since there is not much to bolt onto there and the air compressor belt is right there. My idler pulley just barely fits between the two pulleys and has a smooth flat surface with tall raised sides to keep the belts from walking off. The back sides of the V-belts rid on the idler pulley. I had to custom machine the idler pulley since I couldn't find an off-the-shelf pulley that would work.

My alternator also has little contact with the belts, but I've never had any problem with the alternator slipping when loading.
C

By the way, I like how you mounted the condenser. That is creative. It took me a bunch of time to track down one that would fit between the grill and the radiator. Your bracket for the compressor looks great too. Now you should fab & sell those compressor brackets.

i have not needed to adj my belts since post # 27, so the special gates belts really work.

Wiring the Deuce for A/C

Here are some pictures of the wiring I did on the A/C for the deuce.

As background, I did not use one of the sub harnesses included with the system. Since the Deuce was produced way before this A/C/ system, much modification and fabrication was required. The first picture is of the unused wiring sub harness. It is the one with the 2 large female relay blocks. Mine has a soft metal tab numbered 45152-3387699. This possibly is to be used with the heater, but since I live in Central Florida I did not elect to hook it up.

I forgot to put the O-rings under the 2 pressure sensors (Switches) on the receiver/dryer. I could not get the system to hold a vacuum, and those 2 missing O-rings were the culprits. By the way, it does not matter which port you connect either sensor. They are interchangeable. Just be sure you have adequate clearance between the top of the sensors and the hood. Don’t ask how I know this.
I disconnected to 3 cables from the control panel that control defrost, heat and temp. I mounted the control panel on the discharge on the evaporator. I had to drill one hole for the lower right screw hole on the panel. The 2 holes on the panel seem to be substantial enough to hold the control panel securely. It does not vibrate. I will most likely find a new spot for the panel. But for now it works fine.

I mounted 2 on/off switches on the dash. One for the Aux Condenser Fan and one for the A/C clutch. I turn both on when I turn on the AC. Both are direct 24 V hook ups, directly to the battery with a 20 amp fuse inline from the battery to the off side of each switch. I have a 24 V junction box mounted on the passenger side above the vent, but with the evaporator installed there was little room for my size 12 hands to work in the confined space!

Now, on the control panel harness, there is a large 5 wire plug that plugs on to the 5 blade connector. (The one short brown wire goes to the on/off switch, remember)? There is a black/yellow wire with a plug that connects to its mate. Then there are 3 wires out of the same main harness, an orange, yellow, and black. Cut the orange wire and hook it to the on side of the dash on/off switch for the A/C clutch. The black is a ground wire. Cut the yellow wire and put a wire nut on it. You will not be using this yellow wire. (To get this paragraph right, required about 4 hours of work).
Good luck! It sure is cold in here!

Wiring the Deuce for A/C

Here are a few more pictures: The first picture is the back side of the control panel. 2 switches side by side are for the aux fan and a/c clutch. The one above left is for the Aurora lights. The last picture is the coiled sub harness not needed. Let me know if you have any questions; either reply or PM me. 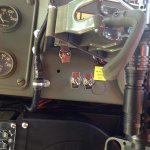 so it sounds like you are not using any type of thermostatic control? you could have then just tied the clutch and the condenser fan to one wire and one switch since you almost always want both to run at the same time.

Good point. I had thought of using just one, but was concerned the current load might be too high running both on one circuit.
M

I wonder if you could put a unit like this under the seat and free up all the leg room.. How much did your complete A/C system cost ?

I believe Zout did one under the seat in a M109 (deuce with box on back), but he had to pull the seat, and completely rebuild the seat so the A/C could fit. It can be done, but there is another issue with the seat framework that need be completely redone.

overtheedge said:
Has anyone tried this in an A3 yet? I just bought a kit and am wanting to put it in my A3. Just haven't figured out how to do that yet.
Click to expand...

Looking to add AC to my A3. How did you install go?
T