How To Modify A Military Antenna Base For CB Use (pics)

The Name Is Fred

I have recently been working on modifying military antenna bases for CB and had a friend asking how and asking me to "show" it here. After looking over this site I’ve seen a lot of posts asking about using military bases for CB radios and 10 meter export radios. Most of the answers in these posts are “yes you can”… followed by no other information… or… helpful but wordy which is hard to follow if you are messing with something beyond ones normal comfort zone. Some is just poorly thought out to the limitations of “Average Joe’s” (non-radio guys) understanding. Or… actually snide and downright wrong with the arrogant intent of frustrating anyone without a HAM background.

If there is one there are 100 different surplus bases out there none of them to my knowledge that will work for 11 meter (CB radio). The base I am going to direct you to an AN-3916VRC which was developed for the military after they figured out that vehicle fired rockets tend to melt sectional antennas. It is a very cheap base, usually selling for $20-$30 dollars ($40 if you are lazy on Ebay). It uses a plan ole SS whip antenna that can be purchased just about anywhere for $25 and once built can be tuned (SWR) like any other CB whip antenna. The base comes with a BNC connector that can be used “as is” or you can easily swap it out for a PL-259 connector (standard CB coax connector). They dissemble easily and only need basic modification to work like an off the shelf “CB antenna”. Best of all when you are done with it you have a true ¼ wave whip which is about the best mobile antenna one can have and for only about $70.

If you are changing the connector

Female chassis mounted PL-259 connector. (google it) $5 and worth doing.


A few notes on materials and methods…


When buying the AN-3916VRC, if it is missing the Jam Nut from the top… DO NOT BUY IT! They are almost impossible to find on any consistent basis.

The Larsen Ball1 whip tip is not a “suggestion”… Whips put out eyeballs! Don’t be the douche that sticks a 100+ inch antenna on to his truck and blinds someone!!!! 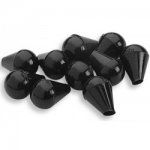 What we’re doing here is “unloading” this antenna base which is currently tuned for 6 meter military frequencies. In laymen’s terms… were gutting it and bypassing all of the fancies making the coaxial core go straight though the base and into the whip.


As someone(s) will inevitably point out…

You could unload this base by simply jumping from one side to the other, however the proposed method leaves you room to go backwards later or repurpose the base by reloading it for other uses. It also preserves the ability to split the base into 2 halves for easy working. You can stick a whip on the base “as is” and probably trim it to work within proper tuning… It would however be a VERY short (worthless) antenna.

Dont fret, were actually going to rip out and destroy every internal part while only changing 2 things!

1. Mounting the base upside down in a vice and remove the 8 stainless steel Philips head screws around the outside and gently pry upwards on the base bottom exposing the insides.

2. Put the base bottom section in the vise and remove the three #8 screws and one #4 screw as shown. This will allow you to pull out the coil plate and expose the back side of the BNC connector.

3. Unsolder the white wire shown at the back of the BNC connector.
4. Using a 5/8 socket remove the connector from the base.
5. Use a 5/8 drill bit to enlarge the connector hole.
6. Use a file for final fitting in install your new PL-259 connector.

7. Cut the resistor leads as shown in the picture

8. Solder the white wire (some are too short to move and must be replaced, use 18ga primary wire) to the screw base as shown. Set the antenna bottom off to the side, that part is finished.

9. Turning your attention to the coil plate, note the parts to cut and unsolder in the photo. You are basically disconnecting all pathways on the coil plate from each other.

10. Install a jumper wire to bridge as shown. (A piece of one of the removed coils works well for this once you burn off the red coating.)

11. Reinstall the now coil(less) plate back into the antennas bottom section. DO NOT OVERTIGHTEN THESE SCREWS!!!!

12. Apply a SMALL amount of silicone to the edge of the antennas top section as shown. (Unless you are still active military, then apply the whole **** tube to it.)
13. Reassemble the top and bottom halves, reinstalling the 8 screws taken out in step one. Again… DO NOT OVERTIGHTEN THESE!
14. Clean off any excess silicone. (unless active military, if so, just leave it all over for the next guy)

15. Turn you attention to the jamb nut on top of the base. The ID of this is slightly smaller (.200) than needed for the new whip (roughly .220) to fit into. Using the number 7 drill bit, enlarge this hole with the jam nut installed (hand tight) in the top as shown.

If you do not drill the nut in the base as shown the bottom section will expand on the bit and not remove enough material when drilling.

16. Cut the threaded portion of the SS whip antenna off, file the edges, install into your newly modified base.

17. Install and tune following the instructions below…

If you have the opportunity to mount the base in a forward position on the vehicle so you antenna(s) tie to the rear do it. This helps prevent folding the antenna forward which will eventually get snagged on something and destroy it… Watching the whole event unfold in front of your eyes is about the only positive thing I can think of for rear mounting. Mid vehicle mounting with at least 70% of the antenna above the vehicle will usually perform better than corner mounting.
​

​
The objective behind tuning your antenna is to make these two readings as close as possible. Getting down to a 1.5:1 ratio or below makes for a passable broadcast signal. There are two basic points to understand before adjusting the length of your antenna:

If your antenna is too long, it is necessary to reduce its physical length. There are several methods for shortening an antenna which vary by manufacturer. Consult your owner’s manual for detailed instructions on how to shorten your antenna. While many antennas feature a “tunable tip” that uses a small screw, some antennas may need to be cut to be shortened. Do so in 1/4" increments and then get new readings to determine your progress.
If your antenna is too short, it is necessary to increase its physical length. Most instances where the antenna length is too short are caused by a lack of ground plane. In modern antennas, there's usually a method for adding length built in to the antenna.
End of stolen materials…

​
There should be no issues with being too short when using a 102” whip. If however… for some reason… somehow… you find this to be the case, remove the spring section from the top of the base and change the shielded wire inside the spring out to a longer unshielded insulated wire such as automotive 14ga primary wire and retune.


Hopefully this helps a few people out and who knows, if the mod takes off maybe we’ll see it become the “Dog Head CB antenna mod”.

Great write up! May I ask where you're finding these antenna bases for $40? I'm only finding them around $200

When this was written last year they had been very plentiful. I bought 4 for my trucks and this mod has worked very well. Times change, when I started in this hobby, Deuces routinely sold for $500 after a depot level refurb.

That is a lot of work for to convert to a CB. I use a working MX 6707 base with the 1730 mast. All you have to do is cut the upper section of the mast shorter (12-16") and manually tune the knob on the bottom of the base till you gain reception. It works fine for 2-3 miles out even with the antenna tied back. And you also get great radio skip on certain channels for more listening pleasure.
S

First and foremost, thank you for taking all the time you did to write the article and to post the pictures.

Second, I am trying to determine whether I can re-purpose a military antenna for AM/FM use. I noticed your section on tuning the antenna for those wishing to utilize it for CB but I'm not sure how (or if) it can be tuned for AM/FM use. It would seem to me that if it can be re-purposed for AM/FM, it should be substantially better than a stock AM/FM antenna. Thanks for any guidance
K

I would like to use the full antenna, not just the base. I want the Mil spec look, and well I already own the whole thing so, why not? If I modify the base as listed above, would I be able to use my whole unit?
C

Tag I am going to try this.

Just a quick note for the non-radio types that might read this. Fred did a great job on describing how to modify these antennas for use with a CB radio and any time you intend on transmitting antenna matching is important. This is done to get the maximum power from your transmitter out into the air with a minimum of power being reflected back into the radio where it could cause you problems. Receiving on the other hand only requires something attached to the antenna connection on the radio to channel the RF energy into the receiver. While tuning the antenna will improve the signal, random wire lengths will also do the job and if your uncomfortable with modifying your antenna just connect it up and be done with it.

One other thing that tends to get forgotten is that whether transmitting or receiving you always want your antenna well grounded to your vehicle. Military installation kits always include star washers that bite through paint and corrosion to insure this happens. Make sure both your RF and ground connections are clean and tight
Last edited: Sep 15, 2019
You must log in or register to reply here.
Share:
Facebook Twitter Reddit Pinterest Tumblr WhatsApp Email Link