Recommendation for 802a battery maintainer

Hey,
Just looking for a simple maintainer for now. Looks like the noco are made in USA which I like. Can anyone recommend one from that brand, and does it need to be 24v? Thanks!
J

There's been a few posts/threads in the last year about such a venture. Yes, NOCO makes good stuff. No, it doesn't have to be 24v...if you're going to the slave receptacle then it needs to be 24v (but they're pricy)...12v 2-bank (one to each battery) seems to be the crowd favorite.

Here's the 2-bank charger that myself and a few of the boys have employed. Seems the most popular mounting location is on the inner bulkhead adjacent to the dead crank switch: https://www.amazon.com/dp/B08F37P7H3?ref=ppx_pop_mob_ap_share

I'm sure a couple other fellas will chime in on how they skinned this cat.

Sent from my SM-G970U using Tapatalk

Morrow1 said:
Hey,
Just looking for a simple maintainer for now. Looks like the noco are made in USA which I like. Can anyone recommend one from that brand, and does it need to be 24v? Thanks!
Click to expand...

2 of these one on each battery they also make a 24 V 1 you can put through the Nato plug I've had excellent results. 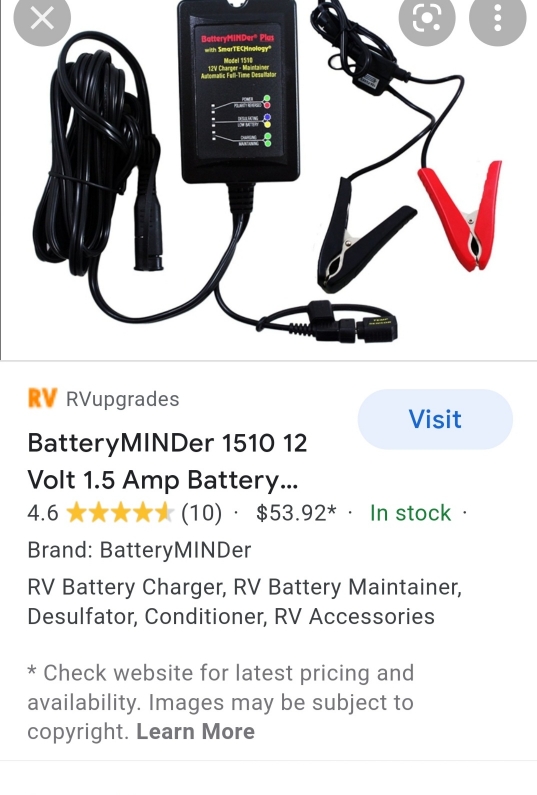 Sent from my SM-G975U using Tapatalk

For years, I had to keep up monthly charging to my trucks & generators to make sure they will always start. Last month, I checked the solarizer that came on the Deuce & it was no longer working as the ledge on the mobile shop was covering the solar cell from direct sunlight. After changing the wires & location of the array, the solar cell proved to have gone bad.

Since I had a few new solarizers in the boxes, I replace the one on the Deuce & added a new one on the M-1081 LMTV. The defective one that was originally on the Deuce, got a solar cell array of its own from an old solar light that had ceased to function & was installed on the newest Deuce. All this work eliminated the battery problems on all three trucks & shows 25.4v on all battery's when checked.

Floridanson gave me a solarizer that a rat ate the wires off of & I replaced the wires & solar cell & attached it to a spare generator 24v battery to keep it hot if needed. The last units I bought were cheap, & the best prices now are $100.00 & according to the company, they are no longer made.
C

I have several of the BatteryMinder 1510 models referenced above and like them a lot. I would recommend using independant 12VDC chargers versus using a single 24VDC charger. If one battery is less efficient due to being an older battery, mfg differences, or for whatever reason... each battery gets what it needs charge-wise independent of the other battery.

However, the new model Noco that will charge two 12V batteries is what I plan to buy in the future. Having a single 120 VAC cord is less cords to deal with and NOCO has a very good reputation. Here is a link to LITD's thread on this new charger offering.

I have also used the NOCO 2700 For 24 V on an M92382 through the nato plug, work good.
But also as noted you have to be aware of the 1 battery (out of 4) that has the least amount of use and rotate and double check them every other week
Also 24v Battery minder on a m803a generator through nato plug also

@Chainbreaker savy memory. I couldn't remember who had written the post that LITD made...this getting old memory is overrated.

Sent from my SM-G970U using Tapatalk

I fire mine up and run it at a 40 amp load for an hour each month. So far that has kept the two walmart lawn tractor batteries up to snuff.
M

Awesome! Thanks for the input