Working On The M561 Gama Goat

frenchman said:
cover that goat or it will turn white and get eat up by the sun
Click to expand...

Unfortunately I have no indoor parking for it at this time. I keep the cab covered since I don't have a top but haven't covered the back before. Guess I'll need to see about buying more tarps and bungees.

Tinwoodsman said:
Turn the Goat around and the rain will collect at the tailgate.
Click to expand...

Actually since the driveway is sloped a bit that might work. But then I'd need to leave the tailgate down and all the air would get out.

mkcoen said:
Actually since the driveway is sloped a bit that might work. But then I'd need to leave the tailgate down and all the air would get out.
Click to expand...

If that happens, check the classifieds, I'm sure someone around here has surplus air, though most of it is probably hot...

Be careful opening the tailgate if your tarp dips and fills up with water.

I am reminded of the Temple air show some years ago when a buddy, who's own truck was down, used my Unimog as his vehicle for the weekend.
We had one of the usual frog-strangler rains overnight, and though the Mog had a tank tarp covering it for the storm, there was no center support over the bed, so the tarp just sank into the bed and filled almost completely with water. I don't know how much, but it was enough to make the back of the truck hunker down. Gallonage would likely be measured in hundreds.
Anyway, he decides to drain it by opening the tail-gate.
I said "Um, Jeff.... that's a lot of water..."
He says "I'll open it slowly".
Well, it didn't happen that way. He was knocked on his tail by the sudden rush of Moggie Falls, and was sitting on the ground completely drenched in short order. He was a bit grumpy until he dried out.

You could make some wheel chock like platforms to raise the center wheels when parked. That would put enough pitch on the bed to let the water roll out if the tailgate was cracked. I also thought about putting in a trailer drain plug from a M416, or the aluminum equivalent. Just have to remember to close it when going swimming.

I think the Texas answer would be to pull out your 45 and shoot a couple of drain holes in it!

Set up for AutoRama. Hiding in the foliage for camo.

Hopefully I can take some better pics tomorrow. The sun was a bit too bright for me to see what I was shooting with my phone this afternoon. There is an extremely nice deuce there and a bobber. Not sure we're going to get any more. Lots of nice custom and classic cars.

mkcoen said:
Hopefully I can take some better pics tomorrow. The sun was a bit too bright for me to see what I was shooting with my phone this afternoon. There is an extremely nice deuce there and a bobber. Not sure we're going to get any more. Lots of nice custom and classic cars.
Click to expand...

I don't want to encourage Driving-and-Drifting, but a couple pics of the best cars sure would be sweet.

Probably the last auto show for me and the Goat. She is currently up for sale to cover some medical expenses but if I'm lucky it'll be around until the Central TX Airshow May 6.

Good luck with the sale, it is a great lookin solid truck. It's gettin lonely around here.

Thanks Tom. I'll still be hanging around. Someone has to bug you to keep working on yours

As I'm sure there's a spot of yellow somewhere on that tranny you recovered we can always have comfort in knowing the Waffle House Express is still in the family.

Now rustle me up someone to buy it!

With mixed emotions I must report the sale of the Goat. It was purchased by another SS member but I'll let him announce that, if he decides to do so. I'll get to take it for one more ride from here to AL some time next week so it'll be almost half way back to where it started in NC. Luckily TexAndy just made a purchase from GL in Clarksville, TN so I was able to con him into another Goat adventure. So once again one of my "Working on the..." threads ends with me selling the item. I'm thinking I probably shouldn't start one if I get a LMTV and want to keep it

Ahh, one of my favorite threads comes to a close. You were one of my inspirations to get one of these unique trucks. I guess all good things must come to a close. Best of luck on your next adventure. I'm looking forward to seeing what it may be

Just this of all the experience you gained with each vehicle. Hope your treatments went well and you are ready for the LMTV shortly.

Tinwoodsman said:
Just this of all the experience you gained with each vehicle. Hope your treatments went well and you are ready for the LMTV shortly.

I was finally feeling back to "pre-treatment" levels and then got hit with a bad case of bronchitis thanks to our abundance of oak pollen. Another week of feeling crappy and I should be back to "normal."

Thanks for the great thread, a super treat, and hope you get to feeling a kind of fine and normal again real soon.

Well the Goat is delivered. TexAndy and I made a 2200 mile round trip to AL to deliver it over the weekend. Everything on the trip went fine until it was time to start it to take it off the trailer at the new owner's house and, of course, it wouldn't start. Turned out one of the batteries had given up between the time I loaded it on the trailer in March and when we dropped it off. The new owner was still completely happy and refused to let me buy a new battery for it. I think it's found a good home and hopefully he'll continue to enjoy it as much as he did yesterday.

Here are a couple of parting shots from Andy's house as I was picking him up for the trip. Vaya con Dios Waffle House Express. 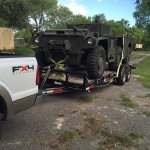 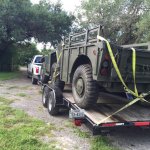