wsucougarx said:
It appears I drove smack dab into a military op. I approached the convoy slowly trying to figure out if I could pass....no go. So I started my 40 point turn around. I had a very captive audience staring and smiling at my curiously loud and abnormal looking truck. As I got turned around the convoy continued on and opened the road.
Click to expand...

Your truck sure is looking good, when you gonna get some accessories for that truck?

Nothing to report on the Goat. However, I had a great accomplishment of sorts. I finally freed up my M101 trailer. I lugged those spare transfer cases out today. Now my next challenge...where in the world am I going to put them. Seems you can never have enough storage space for spare parts 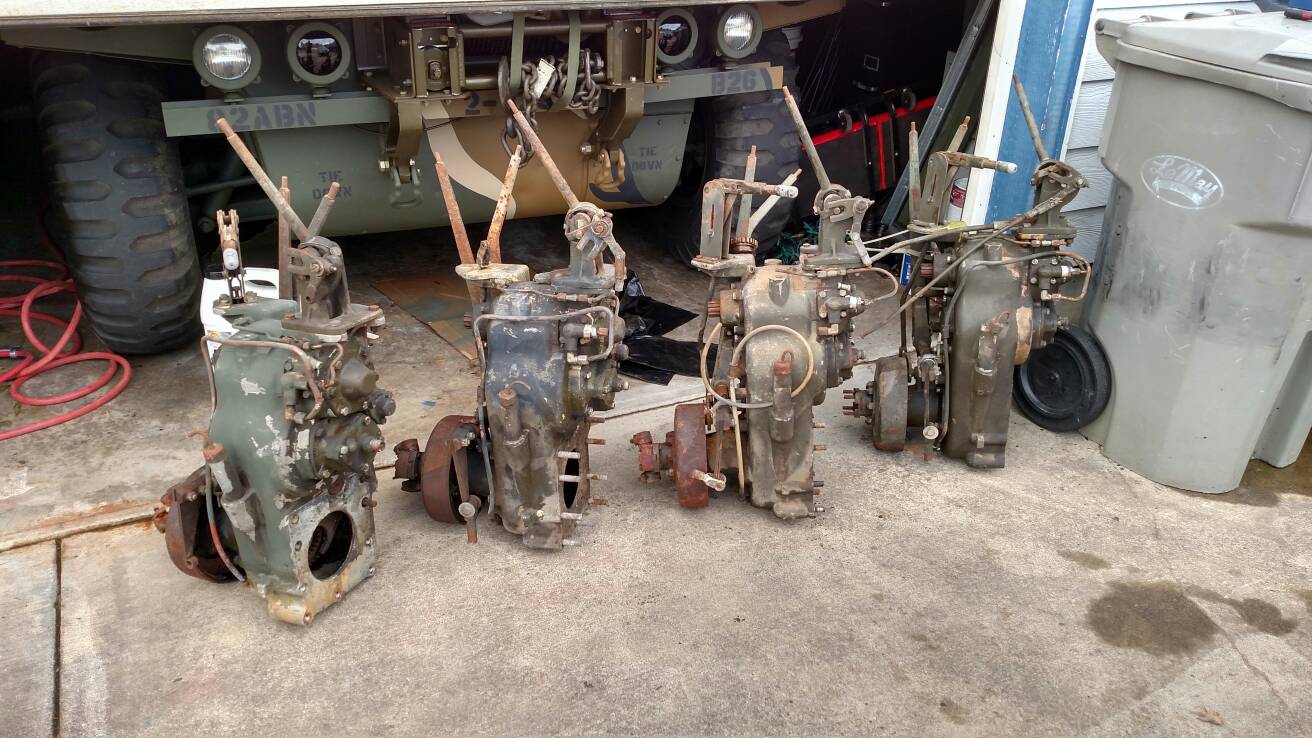 I would be more worried about the front tire alignment, looks like the front right has a lot of positive camber, save those tires!

m38inmaine said:
I would be more worried about the front tire alignment, looks like the front right has a lot of positive camber, save those tires!
Click to expand...

The camber is good to go. Just bad angle with the pic. She does look a bit off in the photo.

You must be the transfer case King! I thought I was a hoarder with my two spares

We have great storage conditions in Oz.... Just putting it out there

Hey Mike, during moving all my crap, I found 2 new tires for the GG, know anybody that needs some? They haven't been mounted and been stored away from the sun.

I do The last batch I got had a couple brittle tires.

Not a whole lot of activity to report on this project. As you know, she's about complete. However, I continue to make refinements here and there. Last Saturday I made the trip to the Stalwart compound to pick up a couple spare parts. Thank you so much Stalwart for thinking about me!! I appreciate you offering these parts to me and the great conversation. My son was thoroughly impressed with everything on your property. The plan is to replace my steer tires with these beautiful NOS tires. However, I am running into a problem. They are too nice to mount onto the Gama Goat

. I think I may just keep in them in the garage for now.

This little truck looks to be the last MV truck project for awhile I've run out of room. I've got this goat in for the run at military truck of the month for September. We'll see how she does.
At some point, I may need to sell a deuce or 5 ton so I can get going on another project. I've really been wanting to do an M37b1.
13,840
Last edited: Sep 19, 2017

With the cold wet weather now almost behind us, I'll be able to get out and get back to work on the Goat. Over the winter, I was in search of a replica M16A1 for the cab. I thought about a Rubber Ducky M16, a real AR15, a replica, or an airsoft M16A1. After much thought and research, I settle on a WE Tech Gas Blowback M16A1 Vietnam. It came with an orange plastic birdcage that I quickly changed out. I had to re-thread the end of the barrel to accept the A1 birdcage. It had a flat back finish was was entirely incorrect for the era that I wanted to represent. So she got the XM gray finish. Next I changed out all the furniture with USGI furniture. It was a direct plug and play. I weathered her a bit to give her that used look.
The rifle feels pretty solid and is about the correct weight. So much so, I took it down to our family Thanksgiving dinner. My father in law was an 11B with the 9th Infantry Division, 2/60th in Vietnam from 1967-1968. He looked at my rifle and had a real puzzle look on his face. He asked he where I got it and said it was illegal. Passed the test. Soon thereafter, my father showed up. He too was an 11B with the 23rd Infantry Division (Americal), 11th LIB, 1/20th, D.Co,3rd Platoon in Vietnam from 1969-1970. No sooner did he grab it he got a look in his eyes and started walking around with the rifle hanging at his side and bringing up in the ready position. He said this is what he did while out on patrol to combat arm fatigue. He too asked where I got it. I informed them it was a toy of sorts and they both just looked at me with a "Yah right" look. Then I showed them the airsoft magazine that went with it.

Over the past few months, I've been perusing different sites in search of radio to fill that dark void in my MT1029 in the carrier. I have a dual radio mount system in the carrier. The top mount houses the AM-2060a with the PRC-77. The bottom was to mount an RT-246a/VRC or an RT-524a/VRC. I ultimately wanted the 246 as my truck is setup for it. So after not finding any radios, I just kind of forgotten about it. Well, unfortunate for my wallet, I have an alert setup on a popular website to warn me new listings. A completely rebuilt RT-246a/VRC came up. Well, since these radios seem to have been few and far between in the past few months, I decided I needed to act on it.

Another project in the making, rerouting my exhaust to the original configuration. As all the Goat owners know, there have been a rash of GG parts popping up online. I've been looking for the tailpipe and intermediate pipe for sometime. So the opportunity presented it self, so I decided to bite.
Through the past couple years, I have been asked to made my Goat. So, this CONDEC badge appeared online. I plan on subduing it and adding it somewhere on the Goat.
14.780

Coug am also looking at the radio setup for the M151. May need to call you in for a consult later this spring. I think I have two of those radios now, so maybe one in the M38A1 too.

Amer-team said:
Coug am also looking at the radio setup for the M151. May need to call you in for a consult later this spring. I think I have two of those radios now, so maybe one in the M38A1 too.
Click to expand...

You bet Peter! Then we'll test the range on these radios.

Sent from my XT1254 using Tapatalk
A

You should bring your kids over on 17 FEB and check out the PBR's at the Rat's Nest in Chehalis. Heck of a lot less PBR's around than most military vehicles.

Back in October, the family and my nieces wanted to head off to the pumpkin patch. We had a problem though. We didn't have a vehicle to hold all the troops. Then my wife chimed in and said why not take the Goat? Naturally I to go with the idea and agreed as I didn't want to cause any friction b/w my wife and I . Trip went well. My wife had a chance to drive the Goat.